Dumb Q #16: Chartplotter vs GPS vs Fishfinder vs Depth

Ok, I think I know part of this one.

A depth gauge just shows how deep the water is at the point of the transducer, right?

And the fishfinder shows an underwater 'picture' of what is 'around' (rocks, trees, ... fish), right?

What, if anything, is the difference between a 'GPS' and a 'Chartplotter'?
tim

Well, I'm not an expert, but in my view a chartplotter is like an automotive GPS for your boat. Generally, a gps just means a tool that will locate your lat/long, but the term has come a long way with respect to the automotive applications. Some chartplotters are smarter than others; for example, the new Garmins have functionality that takes the dimensions of your boat into account and maps out a suggested route based on things like bridge clearance.

And not to hijack, but what is the Navionics app in regards to all these things?
I have only used it once, and it only lets me trace one trip. I would LOVE to have the capability to map out things AHEAD of time (especially for Bimini and Lake Michigan) and then out on the boat, select one. Can Navionics, or a GPS, or a Chartplotter do these things?

@Speedling, not a hijack at all! All part of the same question: what is the difference between all of these things so that I can actually shop for what I need (if anything!).
tim

"Fish finder" could more simply be termed "sonar". And then within that there are different implementations of the sonar technology. Different frequencies of sonar for different levels of sensitivity and clarity. At each of the websites of the major sonar makers you can read up on all the specifics about how they produce and interpret sonar signals and graphically present that to the user for locating and displaying depth, fish, underwater structure, underwater objects, etc. (Lowrance, Humminbird, Garmin, Raymarine, etc.)

GPS, chartplotting, navigation are all based on signals received from satellites. They can do simple things like show you where you are on the lake, river, or ocean by pinpointing your location on an on screen map (orientation). And some can do pretty complex navigation by integrating GPS data and detailed electronic charts to help you choose a safe and efficient route, or even choose the route for you. And they can guide you along the route with graphical, scrolling on-screen images from various available points of view (navigation).

Many sonar (fish finders) have GPS capability built in. Many chart plotters have sonar capability built in. And in chartplotting it's really all about the maps. Many include rudimentary maps, some include fairly serviceable inland or off shore maps. But quality navigation needs quality maps which cost extra and are typically regional, and frequently come on a memory chip that plugs into the compatible chart plotters. You can find out what maps and mapping software are available from the manufacture's websites of the chart plotters.

For answers to these questions and more (like how to REALLY use this equipment) I'd recommend The Weekend Navigator. http://www.amazon.com/Weekend-Navigator-2nd-Robert-Sweet/dp/0071759964/ref=sr_1_1?ie=UTF8&qid=1432633126&sr=8-1&keywords=the+weekend+navigator

This is the kind of book you need to sit down and actually read (not just skim) but when you are done, you'll know enough about navigation to pre-plan your waypoints and routes - both on paper and in your GPS.

All of my major routes are pre-loaded in my handheld Garmin GPS 76S before I leave. They are also drawn out on my paper charts (in the case of most of the areas I boat this means fishing maps rather than NOAA charts).

When I first started boating in these areas I needed this. Now it's nice to have as a cross-check to my visual navigation. Sometimes I wander a bit to one side of the "safe" zone and it's nice to have something to keep me on track.

My humminbird 698si hd does all of this plus sidescan sonar. I can plot a trip ahead of time and it saves all of my tracks so I know where I've been in the past and can take the same route. It also lets me take screenshot and save them to the sd card if there is some I see underwater I want to go back to. I can also add a navonics card to it, which I did, that gives you all the charts for that area including channel markers, marina locations, ramps. Etc etc
2015 AR240 Orca Black & White, 4 Wetsounds X-65IRGB Speakers, 2 Rockford Fosgate m282B Tower Speakers, Wetsounds HT-6 6 Channel AMP, Promariner Gen 3 20-amp onboard Charger, Noco External AC port, Humminbird Solix 10 MEGA Sidescan Sonar/Chartplotter, 10 Gallon fresh water washdown.
[sigpic]1459[/sigpic]

@Speedling , I'm not sure what version of navionics you are using or if you have purchased any of the upgrades but I have it for my iPhone and iPad mini and it allows me to "navigate" / pre-plan my trip using waypoints that I set along the route I choose. This can be done before the trip or on the fly. If I try and use a device that is not GPS enabled like a wifi only iPad I can down load the map at home and use the app the same way I could use a paper map on the road. On a GPS enabled device (I.e., a cellular 3G/4g device) navionics will show me where I am at on the map/where you are at on your planned route. Although they are not dedicated chart plotters and navionics does not map a water route for me, using a smart phone or GPS enabled tablet with navionics has been very helpful too me and is a lot less expensive than buying a dedicated device.

On my pwc my iPhone with navionics has become a multi function device for mapping, music, taking pics, web access and of coarse a phone (now even a decibel meter).

Here is as screen shot of a route I mapped out but didn't use earlier this month. 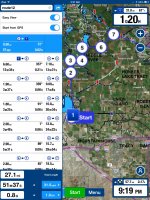 If you are using navionics on a GPS enabled device but only getting the tracking feature or a static map you may need to change the settings on the device to allow for continuous updates to the navionics application.

Ok, there was a button on the maps to go from noaa to navionics maps, then in options I vould select bing maps, but then it won't let me zoom in all that far before it disappeared anyways. I was hoping to get the location point of bimini sands saved. Although I am going to guess that this is way better on a tablet.
My Bucket List and conquered waters.
Bimini, Bahamas - Lake Cumberland, KY. - Lake Michigan South Shore - Portage, IN. to Mackinac Island - Hilton Head Island - Much of the Great Loop - Lake Havasu, AZ. - Lake Tahoe, NV - Lake of the Ozarks - Lake Powell - Grand Bahama Island - Abacos - Florida Keys - Destin/Pensacola - Clearwater Beach - Tampa Bay - Apostle Islands - Lake Monroe, IN. - Chicago Loop - Starved Rock to Peoria - Shelbyville, IL. -Panama City Beach - Lake Geneva - Cedar Lake Lake Norris, TN -

This is one of those things that gets a bit murky depending on who you ask. A GPS uses satellites to figure out where you are. Unless it's old or cheap, it probably also has maps. This applies to land or water. A chartplotter is usually just a GPS thats designed for marine use. A fishfinder is some kind of sonar and usually shows you some kind of underwater "view". If it's just a fishfinder, it won't have maps, but it should tell you depth. Many chartplotters come some kind of sonar sensor (or one can be added), so they double as a fishfinder.

If you check Garmin's marine section, they don't even list "GPS" as a category, even though many of their chartplotters are named "GPSMap" or something similar.


Speedling said:
... I would LOVE to have the capability to map out things AHEAD of time (especially for Bimini and Lake Michigan) and then out on the boat, select one. Can Navionics, or a GPS, or a Chartplotter do these things?...
Click to expand...

Almost all current generation chartplotters can handle some kind of routing and trip planning. If you check the "specs" portion of the description of most chartplotters on the manufacturers web sites, you should see "routes" with the maximum number of saved routes you can have. Almost all have some kind of function for creating routes on the unit itself, although there may also be options to create them using software on your computer to send them to the unit instead.
Last edited: May 26, 2015

Speedling said:
Ok, there was a button on the maps to go from noaa to navionics maps, then in options I vould select bing maps, but then it won't let me zoom in all that far before it disappeared anyways. I was hoping to get the location point of bimini sands saved. Although I am going to guess that this is way better on a tablet.
Click to expand...