So after I calmed down about my hydrolock scare, I took the plunge and did the transducer install for my Garmin Echomap UHD 64SV. After asking a bunch of questions and getting a lot of good feedback along with a ton of youtube videos, I decided to go ahead and try it myself. It actually turned out easier than I expected and I hope it's going to function correctly once I get it back in the water. Anyways, I don't know if many of you use your boats for fishing but I do like to headout with friends to kick back and fish from time to time. There are other threads about transducer installs but here is mine.

First I mounted a sternsaver block so I wouldn't have to drill additional holes in the hull. The block is stuck on with a huge piece of 3M double sided tape. Next, I mounted the transducer and routed the wire upwards. Mounted it on the port side as I thought I would have a little wider area of un-interupted water flow. The starboard side has the factory depth meter so the area was a bit more narrow. I used a Scanstrut cable seal (as JTrottaNY so kindly recommended) and ran the wire through to the area underneath the cleanout panel. 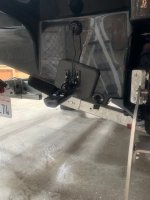 Next, I had to remove the cleanout panel. Just unscrewed the 13 screws and gently pulled up. Like others have pointed out before, there was a thin layer of silicone but it comes off pretty easily. Don't pull it up too hard, gently pry up starting from one side and work to the other. 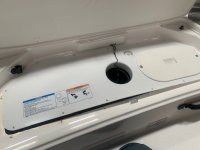 Here's the view from behind the Scanstrut Cable Seal. I used marine grade silicone sealant around the screws and the cable hole. After snapping the picture, I globbed on a bunch more just to be sure its sealed up. By the way, if you get into this area, now is a good time to take a vacuum and suck up all the fiberglass pieces and other debris that Yamaha just left sitting in there from manufacturing. 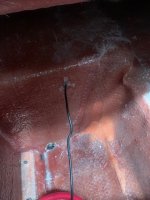 Then it was time to route the wire to the helm. There are existing cables that are zip-tied to the rear of the cleanout port area and I just routed the wire through the zip ties and then through the hole where all the wires and hose go through to the engine compartment. 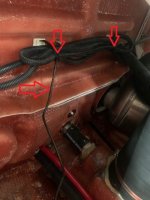 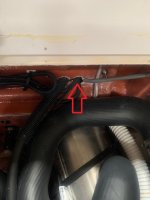 Once in the engine compartment, there is another hole adjacent to the first hole that goes to the storage area under the starboard side seat cushion behind the captains chair. Run the wire through there. 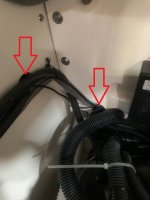 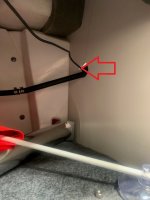 From that compartment, I used steel fish tape to route the cable along the starboard side cavity all the down to the compartment under the helm. Instead of drilling a hole in the dash to route the wire through, I fished it through the vent underneat the steering wheel to plug into the Garmin unit. 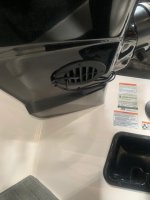 Once everything was connected and verifed as working, I went back and zip-tied the cable to other cables to hide the wire. Then screwed the cleanout panel back on after applying very thin layer of the silicone around the edges. And done! Now, hopefully I mounted the transducer correctly to get a good reading. I'll find out in a couple weeks.......... 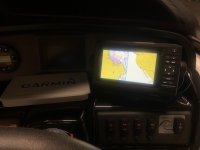 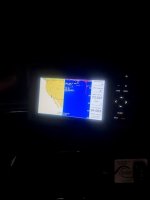 This is an awesome write up. Thanks for sharing! How were the readings from the transducer?
B

Haven't been able to go out since I installed but will be taking it out on Sunday to test it out.
2020 Yamaha AR190 Black - Mods: Cobra Jet AK-19 Ultimate, Garmin Echomap Plus 64cv with transducer, Stoltz bow roller, BoatBuckle tie down
M

Well good luck and thanks again for sharing. I'm pricing everything out right now and this is a big help.

bleudyno said:
Haven't been able to go out since I installed but will be taking it out on Sunday to test it out.
Click to expand...

How did it hold up on your test? Did it work well?
B

Everything worked just fine! Only went out for a slow cruise so i couldn’t test it at speed but at least it works!
2020 Yamaha AR190 Black - Mods: Cobra Jet AK-19 Ultimate, Garmin Echomap Plus 64cv with transducer, Stoltz bow roller, BoatBuckle tie down

You mounted the stern saver with 3M double sided tape? I assume this was not provided in the kit and was something you used? Curious how that will hold up?
B

The sternsaver comes with the the 3M tape already on there. All you have to do is peel and stick. That thing is stuck on there really well.
2020 Yamaha AR190 Black - Mods: Cobra Jet AK-19 Ultimate, Garmin Echomap Plus 64cv with transducer, Stoltz bow roller, BoatBuckle tie down
You must log in or register to reply here.
Share:
Facebook Twitter Reddit Pinterest Tumblr WhatsApp Email Link
Top