Beachbummer said:
Do you get voltage to the little wires in the starting relay when you turn the key? The relays have gone bad before. (checking that would confirm your suspicion that the ECU is not sending power for another reason, or if the relay is bad) Good Luck!
Click to expand...

Just got back in town last night, plan to troubleshoot shoot this tonight if I have time.
2000 Yamaha XR1800

Turned out I didn’t have the waverunner security system 100% bypassed. Now I do. I can completely get rid of the security box too. Both fuel pump primes with IGNITION ON, and both motors start and run.

Next I need to figure out my throttle cable situation.
2000 Yamaha XR1800

So a little bit of bad news. After playing around with the three warning lights on the tachometer, and wiring them back to the ECU, I don’t think there is any way to get the ECU to trigger those warning lights. Even though pins 23, 24, and 25 are unused on the jetski ECU, I was hoping they’d at least still be active so that I could connect to them for the low-oil, overheat, and check engine lights on the tach.

So as it stands now, I don’t see any way that I can monitor for a check engine light while I’m on the water. For low oil, I can probably repurpose the XR’s warning light for low 2-stroke oil. I would have to wire it up in such a way that either motor could set off the light. I wouldn’t know which motor had the low oil condition, but at least it will alert me to knowing there’s a problem.
Last edited: Oct 10, 2021
2000 Yamaha XR1800

Any suggestions for new impellers? Solas has the 13/19 Concord recommended for the XR1800 on their website. Do I go with something slightly steeper to account for the alleged 5hp increase in each motor?
2000 Yamaha XR1800

If I was me, I'd suggest Spend no more cash until after you try it. Depending on your experience while running, you can then make the right adjustments to impeller pitch. (If applicable)

You will be breaking new ground here so making adjustments based on your performance is probably the safest bet.
----
If anything below the waterline breaks, it's the bilge alarm that will alert you and buy you time to address before it's too late to enjoy the rest of your day with minimal expense to repair. If you want to increase your defenses against a broad range of things that can go wrong, consider a bilge float and bilge alarm/indicator, and possibly more bilge pump power.
U

I agree, try what you have before buying more. I'm guessing the new setup weighs a little more and negates the horsepower gain anyways.
1999 Yamaha LS 2000 - SOLD
2005 Yamaha AR 230

Not really sure how much of a true benchmark my 20 year old stock impellers will give me.
2000 Yamaha XR1800

UnorthodoxCreations said:
Can you cut the throttle cables and put something like these on? https://www.napaonline.com/en/p/NOE7311134?cid=paidsearch_shopping_dcoe_google&campaign=GSC-Catch-All&campaign_id=6478877959&adgroup_id=79272987338&adtype=pla&gclid=Cj0KCQjw1ouKBhC5ARIsAHXNMI-UeSiLIUzyOQe00rbdU3ZyjGhYo_qoj4sSNs8x_r2Gcfgx1pnWhB4aAoo7EALw_wcB&gclsrc=aw.ds& You can put a little solder on the ends of the cable to make them stronger and keep them from fraying.
Click to expand...

So over the weekend I figured out my throttle cable situation. At least temporarily. I went with something very similar to what @UnorthodoxCreations suggested, and bought the Dorman 03336 throttle stops from AutoZone. I used the smallest 1/8" stops in the assortment. I cut the end of my throttle cables off with my Dremel, and then had to drill out slightly larger the holes in the throttle stops in order for the cable to thread through. Cut off the excess cable poking through the other end of the throttle stop, and hooked it up to the MR1 throttlebodies. Not sure that this will be a permanent solution, but now at least I could start the motor and blip the throttle. Nice to hear that sport bike sound, makes me miss my Yamaha R6 that I rode through college. 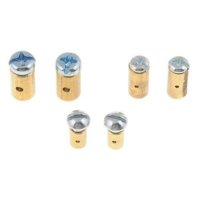 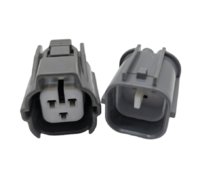