Ok boys (and girls), I have about 9 days until I pick up my new 2018 210 FSH. Friday, April 12th is D-day, and I couldn’t be more excited. I have a list of things I’m going to do to the boat, either right off the bat or eventually, that I’ve been planning since I put my deposit on her September last year. Yes I might be a masochist, but I made it the 6 months without killing anyone. So far, I plan to add or modify the following...

1. Cobra Jet Super Magnum AK fins with Mega Fang Pluses
2. Android tablet with Ram mount for Navionics plus as navigation, integrating with-
3. Raymarine Wi-Fish for sonar. This should tie in to the Navionics app as well.
4. Standard Horizon 1700 GPS VHF radio w/8’ Shakespeare Centennial antenna. Flush mounted in the console.
5. Upgraded courtesy lighting in gunwales as well as a “dome” light above the console.
6. Go Light remote control 200,000 candlepower LED spot on the front of the T-top, and some flood lighting out the back. As spreader/docking lights.
7. Air pump mounted in battery compartment for towables.

If you care to see what happens, follow along with me as I install this stuff! Advice and constructive criticism is always welcome, sometimes I struggle with over thinking a solution or even coming up with a solution for a problem that doesn’t exist. Full disclosure, I’m also not an engineer but I can usually come up with some function over form, yet elegant solutions. In addition, this thread will have a title change once my new boat is here, with her name in the title. Some of you may have seen it in a thread months ago, but I won’t reveal it here until the name is on the transom.
Last edited: Apr 13, 2019

So in order, we have the fins, the individual Ram components for the tablet mount, and the Samsung Galaxy Tab E 9.6” I’ll be using as a display.

Great! Take your time on the install you will be looking at it for a while.

@Liveto99 I have a hint of OCD (or more if you ask my girlfriend) so this will most definitely be a top notch install. 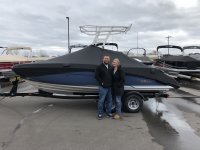 Here she is boys... coldest boat delivery on record maybe, but we’re on the way home!

Best of luck! Enjoy it.

Well, I had this date set up for a couple weeks. Last weekend it was 70 and beautiful. Yesterday it was 38 and there were snow piles in spots. I’m really looking forward to leaving the upper Midwest behind...

The mount itself is bolted to the console, and the tablet locks into a spring loaded cradle. Very easy to just pop the tablet out at the end of the day.
Last edited: Apr 13, 2019

TW Merema said:
So the mount itself is bolted to the console, and the tablet locks into a spring loaded cradle. Very easy to just pop the tablet out at the end of the day.
Click to expand...

I have the suction cup mount and have it on my boat windshield and was impressed with the product and now i use it in my trucks because i swap between 3 for work. You have a good idea for sure there.
Hope the fsh turns out awesome. Keep us updated on the mos and usage!
My Bucket List and conquered waters.
Bimini, Bahamas - Lake Cumberland, KY. - Lake Michigan South Shore - Portage, IN. to Mackinac Island - Hilton Head Island - Much of the Great Loop - Lake Havasu, AZ. - Lake Tahoe, NV - Lake of the Ozarks - Lake Powell - Grand Bahama Island - Abacos - Florida Keys - Destin/Pensacola - Clearwater Beach - Tampa Bay - Apostle Islands - Lake Monroe, IN. - Chicago Loop - Starved Rock to Peoria - Shelbyville, IL. -Panama City Beach - Lake Geneva - Cedar Lake 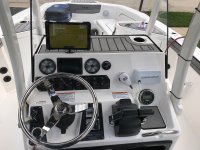 The console so far. I got the VHF and tablet all mounted up today and wired. I haven’t worked on the WiFish yet, that’ll be a job for tomorrow or Monday since it’s supposed to snow tomorrow. Ugh. Anyways, I’ll get some more shots of the tablet and possibly the sonar if I can get this thing in the water.
Last edited: Apr 13, 2019 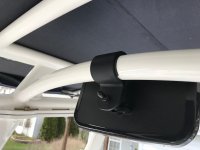 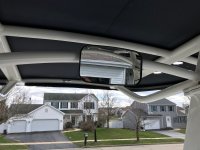 Thanks. I envy your weather, if it was 90 here I’d have been on the water instead of installing accessories lol!

Wife was out of town this weekend so me an the girls (my 13 and 10 year olds) got sunburned...I love living life were we have to have a budget line for sunblock!! They are in bed past out now!!
Jack

TW Merema said:
Thanks. I envy your weather, if it was 90 here I’d have been on the water instead of installing accessories lol!
Click to expand...

Depends on how the schedule goes, if anything it might be a day or 2.

Congrats on the boat. I saw it when I stopped in the other day to talk with Corey. She's beautiful!

Mine is due to arrive any day now. Gotta say the 5" of snow the other day and current 38 degree temperature put a damper on the excitement though!

You had shared the mirror we had spoke about. From your comments it sounds like you'd try to find a different one if you had to do it over again?

Thanks! I’m really happy with my entire experience with those guys, Corey, Chris, and Troy. All very helpful and willing to serve the customer. As for the weather, we didn’t get any of that snow a few days ago but today my boat is sitting there with 2-3 inches of it on the cover. I’m getting pumped for warm weather. I’m not UNhappy with the mirror, but I’d like if it gave a wider view behind. Something wider with more curve, like this one: