so my bilge works on a manual switch, yet when I look down in the engine bay, it clearly says automatic bilge.

I’m in a slip for a couple months and this thing takes on A LOT of water. kinda worries me.

how’s it work? I always assumed if I leave it on it’ll “burn out” when water isn’t on there. can I leave it on or do I need to add a float to make this thing automatic?

If you have the same bilge which I'm assuming you do (2016-2017) it cycles every 2 1/2 minutes checking for resistance (bilge water) and if it senses it, it pumps. So, with the helm bilge switch on (lit), its in automatic mode. You do not need a float and you will not burn it out. It doesn't make sense to me the whole cycle thing...I grew up with floats attached to my bilge pumps. Your main battery switch has to be left on for that to occur. I've added an additional battery and battery switch, so when I turn my main battery switch off, everything is off, including bilge. We rent for 2 weeks in a row and that's the only time it sits in the water and I leave it on the whole time, never an issue with battery run down, unless its running a lot like you say with a lot of water. You say a lot of water? Cause of rain/weather or coming somewhere from the bilge? Do you cover your boat?
My factory installed Rule just failed, so I had to replace it and I added an additional pump:

well honestly, I don’t know what “a lot” is as I’ve never even had my/a boat in the water before like this. but for example, over night, there’s 100% a need for running it. center storage has like 2-3” of water. it pumps out quick, but it collects. and no...not weather. I’m in Sacramento on the river. it’s like mid-90’s hot rn. there’s tide, current, and passerbyers constantly. is this normal?

adamsrotors said:
well honestly, I don’t know what “a lot” is as I’ve never even had my/a boat in the water before like this. but for example, over night, there’s 100% a need for running it. center storage has like 2-3” of water. it pumps out quick, but it collects. and no...not weather. I’m in Sacramento on the river. it’s like mid-90’s hot rn. there’s tide, current, and passerbyers constantly. is this normal?

and thanks...it’s on a tender so I’m safe. I’ll go flip the switch today and measure the water line. I left it yesterday at about 4pm so I’ll see how it looks.
Click to expand...

If the boats in the water (assuming the stock pump), then the bilge switch should be on. It will check and pump as needed. I like the system myself, but many prefer a float switch system. If I was leaving the boat in the water continuously, I think there is a good case for a solar trickle charger, float switch, and hardwired bilge. For a weekend lake boat, I think the "auto" style is just fine. FYI, I replaced mine this year. 150hrs on the engine, and mid-way through season #4 on the water. The new part number from Yamaha has an upgraded/changed filter basket on the bottom, it's an easy swap, but it does require removing the old basket and attaching the new one with the same screws. Took me about 30min.

You have a leak somewhere sir. Mine will sit on the water for days without taking on additional water (assuming it's not raining)

Easiest thing to check, which happened to be a LOT early on, was debris around the drain plugs. Next time you're in the water around the back of the boat, pull the plugs out, and let some water rush into the hull, then put the plug back. This will clear debris and lubricate the seal slightly. Crank it in there pretty tight as well. If you can easily get the boat on a trailer, then pull the plugs and use some O-Ring lubricant on those plug seals and that will help as well.

Also, keep in mind that your cupholders (from the factory) are NOT sealed. The ones on the rear swim platform drain DIRECTLY into the bilge. This is a HUGE water access area if you are doing a lot of swimming/jumping/watersports off the back deck. My toddler LOVES to sit on the rear platform and dump buckets of water on his head. I could watch the bilge respond to each bucket with about a 1min delay.

Also check the rear storage area, and "reseal" this area. The access panel often has stripped screws, poor sealant around the perimeter, and around the access holes, as well as a poorly sealed drain. The drain ALSO doesn't have a check valve in it, so when you come off plane water rushes against the back of the boat and backflows into the storage area, and then drains into the bilge. Kind of a PIA that area is. It's convenient and all, but it leaks like a seive.

I absolutely HATE how much water gets on the INSIDE of the boat, and how often my bilge pump runs. It was mildly infuriating for the first few seasons. I've learned to just be OK with it, and keep an eye on bilge pump activity. So long as it isn't running constant, it's really no big deal, just a nuisance.

When I added a second battery and replaced the factory battery switch with the BlueSeas one, i noticed the bilge pump power was bypassing the battery switch, so even with it off, the pump still had power running to it. To check yours, follow the red positive cable from battery to the switch, see if there is a second red line on the same lug at the switch as the battery one. Mine had one at it was labeled pump.
I kept the same with the new switch, see the circle, top wire comes from battery, bottom wire you can see labeled pump. 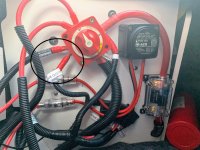 I’ll try the plug trick...that’s gotta be it. I’m talking about water from just sitting in the slip over night, NOT use/water sports/play. I’ll report back
today, but won’t be in the the water to mess with plugs till sunday.

isn’t there also a hole up above just under the swim deck? white plastic sleeve. could water be getting in there as the boat rocks and traffic goes by? I always thought it was normal for them to take on water from sitting.
adam | adam's rotors inc. | info@adamsrotors.com | est. 2006
customizable factory-fit brake rotors, made-to-order | adamsrotors.com
follow/like/@/tag @adamsrotors on twitter, instagram, & facebook | #adamsrotors

adamsrotors said:
I’ll try the plug trick...that’s gotta be it. I’m talking about water from just sitting in the slip over night, NOT use/water sports/play. I’ll report back
today, but won’t be in the the water to mess with plugs till sunday.

isn’t there also a hole up above just under the swim deck? white plastic sleeve. could water be getting in there as the boat rocks and traffic goes by? I always thought it was normal for them to take on water from sitting.
Click to expand...

Shouldn't take on much water from just sitting. Rain is the main culprit there.

There are two fittings on the back that could be allowing water into the bilge. I'll take some pics tonight of mine if you want.
The first is a large white fitting with a black plate over it. This is the scupper drain from the deck. It has a one way valve in it, and a plate to keep rogue waves from infiltrating the hull. The second is the drain from the rear wet storage area, this is a smaller white plastic fitting. This one CAN and DOES backflow, but usually only in heavy waves, and from coming off plane. It's possible if the boat is in a high wave area, that water is being pushed backwards up this hose, then into the cleanout/storage area, and then entering the bilge through a poorly sealed tray.

There are a couple other fittings under there. One is from the engine for hot water to exit the boat. There is the exhaust port on the left lower area, and I think that's it. I'll investigate tonight and report back.

Found and marked up this picture. Explains it pretty well. This is under the rear cleanout tray, and behind the engine. I accessed this space by removing the bulkhead on the aft starboard rear storage area (3-large screws and it comes right out) 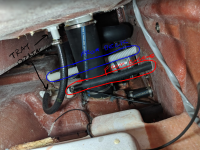 Also......There are several other thru-hull fittings below the waterline when stationary. I would suggest opening the tray while on the water and looking in the access ports back there. See if you can see any water trickling in. I could see water coming in, in that area, when my plugs weren't seated well.
E

I would check your manual (,LIT-18626-11-38) but in looks like you need the battery on and the bilge switch on for it to run automatically if it detects water.
You will get water when it rains, but most of that should drain though the scupper. We have a newer boat, 2020 212s, but we leave it in the water for a few days and never get more than a gallon from the drain plug....

so in 24hrs there was legitimately 1 foot of water in the center storage area.

needless to say the boat is on a tender and battery #2 is on with the bilge on.
when I get this out of the water in a couple months I need to get this inspected beyond just the plugs for sure.