Scottintexas said:
maybe we should start a sap/syrup thread,
Click to expand...

Ok, done. I will take you guys on a journey of sap from a maple tree as it gets sucked into a pipeline and then flows to the releaser and then gets pumped into one of my storage tanks until it gets picked up by truck by Georgia Mtn. Maples. I will then show you their very impressive syrup production facility a few miles down the road. Pics. comming.

But to answer @Ronnie 's question... yes all live trees will have "sap" in them that will carry nutrients from the root ball up to the canopy/leaves. But only maples and birches as far as I know, produce sap for boiling into syrup.

When I think of a thick gummy sap or pitch I think of black cherry gum or pine tar/pitch.

The first european settlers in the area watched the indigenous "indians" cutting the bark and collecting sap from these trees and boiling it to produce syrup.

This is going to be awesome!

I don't know if you run a retail operation, but this could end up with a banner and a group buy!

--
"I have no special talents. I am only passionately curious."
Albert Einstein

swatski said:
This is going to be awesome!

I don't know if you run a retail operation, but this could end up with a banner and a group buy!

Hey @zipper , do you have Netflix? I’m kind of a documentary addict. I just watched the 7 part series called Dirty Money. One of the episodes was called The Maple Syrup Heist. It’s pretty interesting. I had no idea the Maple syrup industry was so mafioso in Canada!!!

I have relatives in Loudon NH who own a maple syrup farm across from the Race track. We use to go up there once a year for a family get together with a pancake breakfast. Best syrup you can buy way better than the store stuff.

The short run we had last week froze up hard with a lot of sun but daytime temps in the 20's and night time temps below 0. So I cannot get the video yet. Pretty cold for mid March. When the sap runs again later this week/weekend I should be able to get all the raw video recorded. For maple sap to run, daytime temps. need to be 38°+ and nighttime temps be 32° or less. These temp. swings make the sap run up and down the tree.

Yesterday we decided to do brunch at one of their Sunday Pancake breakfasts at their massive sugarhouse, it was packed, good food, great syrup and a private tour of parts of their facility. This facility processes maple sap from nearly 200,000 taps, of their own and a few little guys like me with only 5600 taps. Here are a few picture from yesterday. 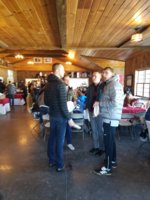 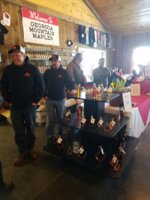 Rick on the left, Nick the operations manager and Kevin on the right, the owner. 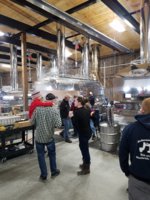 They only had one rig running as the freeze up stopped the sap run and they had to save the sap so they could boil for people today. 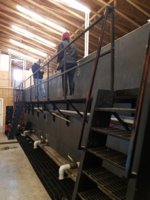 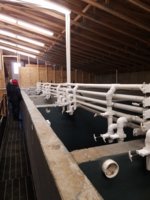 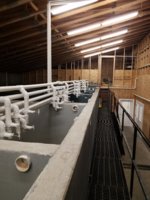 Sap storage 20,000 gals each made from concrete, owner has a concrete company. From there it goes to the R.O. posts to be 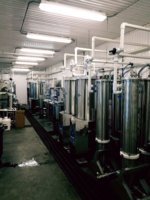 Sweetened from a raw 2% to 20% to save on boil time and energy costs. 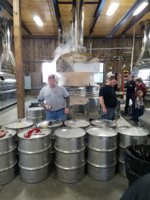 When they draw off the syrup they pack it into barrels and either sell it wholesale or repack into smaller jugs/bottles later. 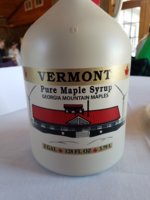 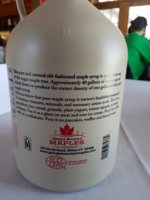 Went there, had a good breakfast, talked to the guys I usually only text and because I sell them sap, I came home with a free company uniform. 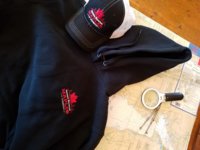 Bump...It's that time of year again for us Maple tree huggers. Out in the woods, tapping when the weather permits. It is peaceful out here with the wind in the trees and no one else around. A day out here will clear your mind.

My work shoes are snow shoes and my tool are always at hand, I love recycled bailing twine. Right up there with duct tape. 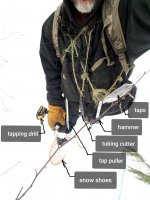 So maybe we've been over this before but I can't remember,

Do you leave existing taps in and just continue to create additional taps and lines or does a tap "run dry" eventually causing a need for a new one?

Is it possible to over tap a tree and kill it ?

.
Check out this thread for known issues of "classic" style Yamaha boats (2004-2009)
(many of the links are broken because of the FAQ reshuffle, use the search button, top right of the screen with key words)
https://jetboaters.net/threads/known-issues-for-boat-years-2003-2009-with-mr1-engines.15464/

This is in our pantry, I apologize, I tell my wife to buy Georgia Mountain next time

Check out this thread for known issues of "classic" style Yamaha boats (2004-2009)
(many of the links are broken because of the FAQ reshuffle, use the search button, top right of the screen with key words)
https://jetboaters.net/threads/known-issues-for-boat-years-2003-2009-with-mr1-engines.15464/

Scottintexas said:
So maybe we've been over this before but I can't remember,

Do you leave existing taps in and just continue to create additional taps and lines or does a tap "run dry" eventually causing a need for a new one?

Is it possible to over tap a tree and kill it ?

Good questions. First, a tree will try to fix the wound I put into it as soon as it wakes up from its winter sleep. Cold nights and warm days cause the sap to run up and down the tree. As this cycle gets later in the season, April, the sap is carrying a coagulant we call nitre. This signals that the end of the season is near. The stuff will plug up the reverse osmosis filters pretty quickly. At season 's end, I pull the taps. The only reason I carry a tap puller during tapping is...I always seem to miss pulling a few of the 5600 in the spring.

Second, yes you can kill a tree if you are not observant. Especially the small ones, I dont tap under a 9"dia. tree. Being Organic, I follow tapping guidelines as to how many taps are allowed in certain size trees and never put more than two taps in even the biggest trees. The holes are 5/16" and drilled to 1 1/4" deep, slight angle down hill, I use a stop on the drill bit so I don't over drill. In a healthy tree the hole is healed over a year later. The "drops" I use are 3' long, off the lateral line, so it gives me plenty of manuverability to place a new tap away from previous tap locations, both up and down the tree and around the tree. This is a healed over tap hole.

You don't need Ga. Mtn., as long as it is real Vermont Maple syrup.

The weather has warmed and the Maple trees are running. This is what a "Run" looks like. This is a tree that I just tapped today and it was busting full with sap. You can see it streaming down the tubing. This is not a vacuum leak, as the sap is pooling in the tubing. Its just a good run. 7000 gallons in the last 18 hrs.

I remember the first time I helped collect sap in my friend’s sugarwoods.
The portion I was in had buckets instead of lines, and the first two I came to were filled with “water” when I flipped the lid off. So I just dumped those buckets out and headed back on to check some more.

I get back to the wagon with an empty 5-gallon bucket and my buddy says “wasn’t there anything in those taps?” I started to say “just a bunch of water” when I glance down at his bucket full of a clear liquid he called “sap”, and then corrected myself by saying “nope, those trees must not be running I guess...”

I then went off and actually collected the rest of the sap, feeling like a complete Flat-Lander.

Just remember to keep it 40:1
He who makes a beast of himself gets rid of the pain of being a man

Today is the last day of deer muzzleloader season in Vermont. I wanted to go out in my sugarbush to do some repairs while there is no snow in the woods. I usually wait until it is over, but the weather has been warm 48° F yesterday. Much easier to do the repairs in relatively warmer weather. Not as warm today, light snow. 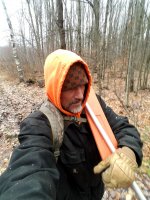 I started tapping the week after Christmas, earlier than ever before. Today, I took this quick video of drilling/tapping and the small sap runs that have been happening when the trees are usually frozen in Winter. More warm weather today makes this easier to get around, but we won't know how the season ends up til it's over.

First big Sap Run of the 2020 season yesterday. Pulled 6300 gallons out of the woods before it froze up again last night. Ahhh, It is really nice to see temps. in the mid 40's to 50's over the last couple of days. The hard work of snoeshoeing around the woods looking for leaks recently has paid off as my vacuum is at 26" now out of a possible 27" of vacuum. Just a few more to find.

This was a big one, one of my dry vacuum lines had pulled apart. Vacuum came up 5" with this repair.

It is finding all the small leaks caused by deer and squirrels that keeps me walking. I need to invest in a vacuum monitoring system. H2O-Smartrek™ - H2O Innovation Érablière These leaks are obvious...