First, the link to the YJB thread I did for this:
http://yamahajetboaters.com/forum/viewtopic.php?f=1&t=59905&start=27

What's Throttle drop? When you have to push the throttle past where you actually want it to go, so it can drop back down to where you want it.
How is it fixed in a nutshell? By opening it up, finding the fingers that hold the tensioner spring with a small tab and pinching it tight or wedging it tight.
Sounds simple enough, but it's actually a large process getting into the throttles.
Mechanically inclined people can do this in about half an hour, the rest of you probably an hour, but it's fairly straight forward.
My pictures will help once I get that all on here as well.

Copied from my other post:
************If you do this, and can water test if it is indeed successful, please let us know!******************
Notes/Tips:
This is to get rid of throttle drop, NOT the little bit of play in the throttle levers themselves. That can wait for now.
Keep rags handy as there is a decent amount of grease in there.
You may want to label Port and Starboard, but locating the tensioner screws can help you get things back together.
I didn't need anything special, or make any custom parts, although, I surely could have.
This could take you as little as 30 minutes to do both sides, but set aside a good couple hours and a couple beers just in case.
Philips screwdriver, Flat head screwdriver, tool to remove c-clips, and electrical tape are all that's needed. I used a cordless drill for the philips screw/bolts and it worked great.

First, the steps in writing:
1. Pop the small cover at the rear of the throttle assembly where the tensioner screws are located.
2. Loosen the tensioner bolts (the flatheaded screws) just until loose.
3. Take the 2 Philips screws out and remove the plastic cover. You may need to push one throttle lever forward to twist it out.
4. Take out the 4 Philips head screws/bolts that hold the assembly into the boat. As you pull the assembly out, be sure to watch for two small plastic pieces under the throttle levers as they can fall off and into the hole of the boat. They aren't all that necessary, just small trim pieces.
5. Unscrew 2 screw/bolts at the top (somewhat hidden by some foam in my pictures) and one bolt and nut at the bottom. These hold the two halves together. (for dual engine boats only)
6. Label Port and Starboard, especially if you plan on doing both outside of the boat at the same time.
7. Optional: Disconnect the wire harness. This is the neutral cut off switch. Be sure to label them if you are taking out both sides at the same time so you don't have them hooked backwards. This needs to be done if you are working on them outside of the boat.
8. Take out the two screws on bottom of the black back panel and remove that panel
9. Take off the C-clip on the gold colored cable (this is your throttle) and pull the cable up out of the assembly.
10. Remove the rubber spacer between the two cables and DON'T lose it. This is required for the cables to be situated in the assembly later.
11. Remove the next C-clip by putting throttles in REVERSE all the way including the reverse throttle. (not just first indent) At this point you can test the slop in your throttle assembly. Put it in forward and put it at various amounts of throttle and watch how the levers actuate and how it drops slightly after you let go. This is what we are CORRECTING TODAY! YAY FOR YOU!
12. Remove 4 bolts holding the top black panel and remove said panel.
13. Remove the C-clip on the metal slide, right in the middle.
14. Remove the slide piece. Mine was stuck with grease and such and I used a flat headed screwdriver to give it a quick pry. This shouldn't take much effort.
15. Pull off the arm with the nylon bushing. You may need to loosen the tensioner some more if you didn't do so previously. This acts as a clamp on this bushing. Also, see if there is any irregularities in the nylon. If so, you may need to find a replacement.
16. Grab the tensioner and clap and pull it out as you are turning it to remove from the assembly. Don't lose the washer!!
a) Where mine had the most problem and success of getting rid of it was with the clamp you just removed between the fork. I wrapped some electrical tape around it about 10 times and it was very tight when I put it back in, to the point of having the tape squish out around the fork. This got rid of any slack, and got rid of the drop, at least in tests in the garage.
b) The shaft that the nylon bushing rides on can be misaligned slightly. I did this with my first one, and it helped some. Loosen the two 10mm bolts but don't take them out. Pry the forked piece away from the assembly housing and re-tighten the bolts. This may or may not be your problem. It did seem to help on one of them for me. If you do this, and it solves your problem, you may want to throw some loc-tight the bolts and put them back in. I really have no explanation as to why there is so much slack in this piece.
17. If you put the tensioner piece back on, the nylon piece with the attached arm, the metal slide, and the top black backing plate, you can test to see if you were successful. If so, wonderful! I'm glad it helped! Now put it back together and enjoy! If not, post it up here so we can help!
18. Be sure to re-tighten your tensioner before you test it and think it's super loose and you broke something.
19. When putting the metal slide back on, be sure you have the BOTTOM slot on the top pin.
20 put the c-clip back on the metal slide, put the cables back on, WITH THE SPACER between them, again, with the bottom one needing to be in reverse to do it.
21. Put the backing plate back on.
22. Do the other side
23. Bolt them back together and put back into the boat.
24. Enjoy/test/rant/rave!
Last edited by a moderator: Sep 18, 2017
My Bucket List and conquered waters.
Bimini, Bahamas - Lake Cumberland, KY. - Lake Michigan South Shore - Portage, IN. to Mackinac Island - Hilton Head Island - Much of the Great Loop - Lake Havasu, AZ. - Lake Tahoe, NV - Lake of the Ozarks - Lake Powell - Grand Bahama Island - Abacos - Florida Keys - Destin/Pensacola - Clearwater Beach - Tampa Bay - Apostle Islands - Lake Monroe, IN. - Chicago Loop - Starved Rock to Peoria - Shelbyville, IL. -Panama City Beach - Lake Geneva - Cedar Lake Lake Norris, TN - 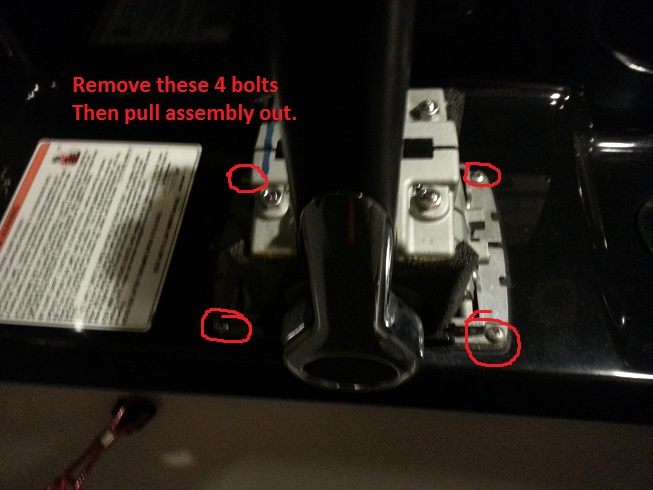 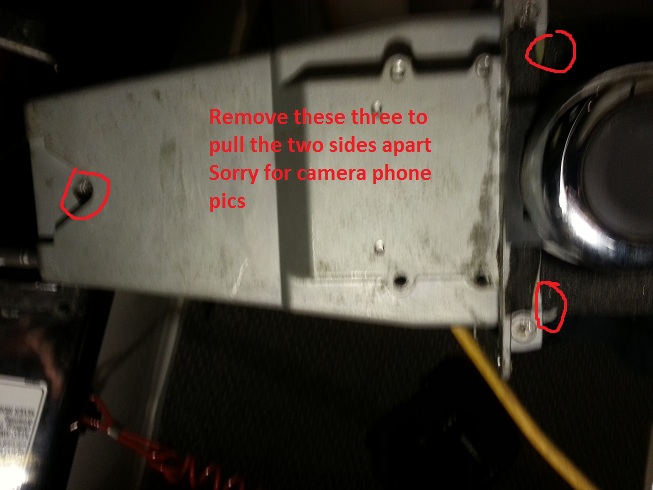 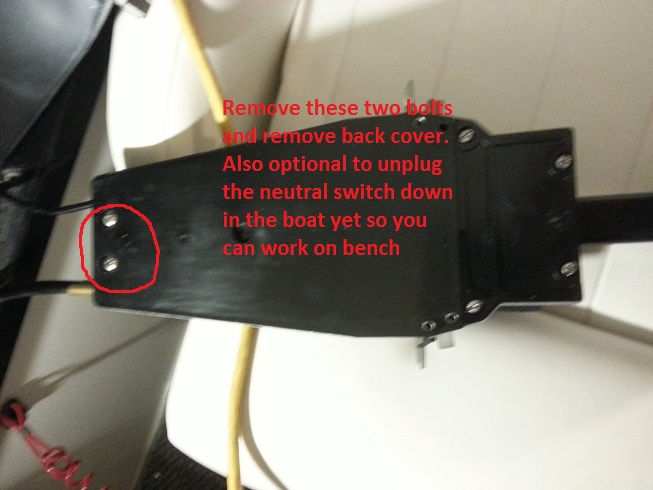 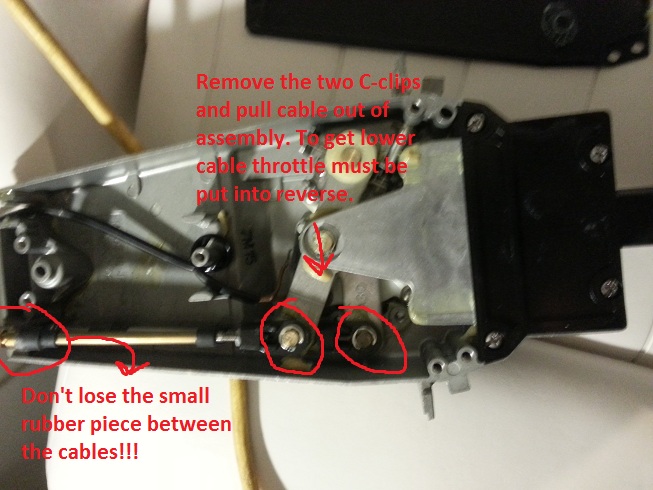 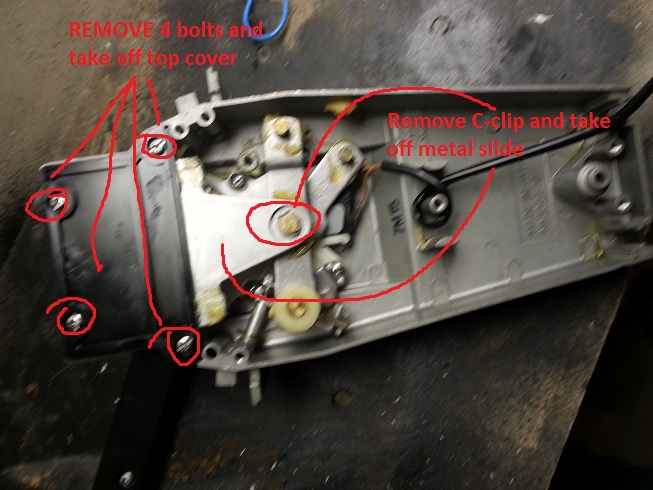 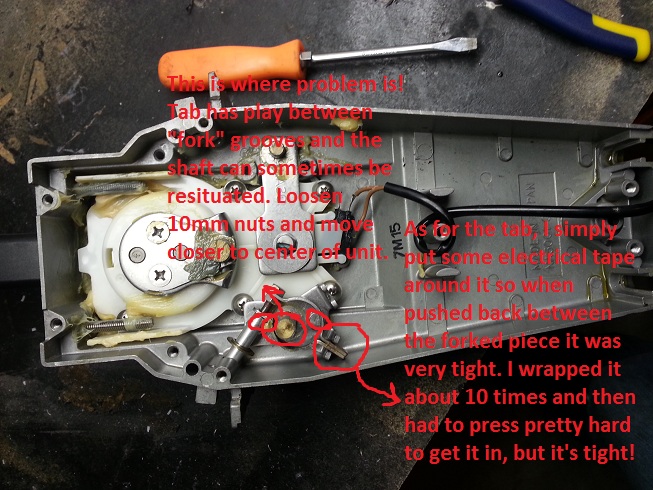 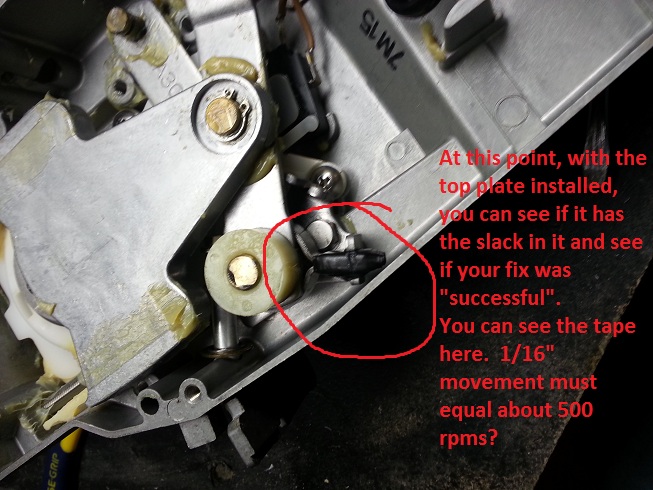 All done, so I hope you guys like it and that it helps someone!
I know I got tired of messing with the throttles all the time, so this helped a lot.
Also, I know I just used tape, but you can obviously use something better. I keep an eye out for something a little more industrial, but I am scared of just bending the metal to pinch it in better. I would think that I would be the one person that has it break when I do that.
My Bucket List and conquered waters.
Bimini, Bahamas - Lake Cumberland, KY. - Lake Michigan South Shore - Portage, IN. to Mackinac Island - Hilton Head Island - Much of the Great Loop - Lake Havasu, AZ. - Lake Tahoe, NV - Lake of the Ozarks - Lake Powell - Grand Bahama Island - Abacos - Florida Keys - Destin/Pensacola - Clearwater Beach - Tampa Bay - Apostle Islands - Lake Monroe, IN. - Chicago Loop - Starved Rock to Peoria - Shelbyville, IL. -Panama City Beach - Lake Geneva - Cedar Lake Lake Norris, TN -

@Speedling This was a great fix, I'm glad you were able to post it here,

Can you tell us when you did the fix and aprox. how many hours of use it has held up for now?
Check out this thread for known issues of "classic" style Yamaha boats (2004-2009)
(many of the links are broken because of the FAQ reshuffle, use the search button, top right of the screen with key words)
https://jetboaters.net/threads/known-issues-for-boat-years-2003-2009-with-mr1-engines.15464/

I did it right after I winterized the boat, so no time to test, however I have confirmation from at least 3 people that it worked, and I can only assume it stays that way!
My Bucket List and conquered waters.
Bimini, Bahamas - Lake Cumberland, KY. - Lake Michigan South Shore - Portage, IN. to Mackinac Island - Hilton Head Island - Much of the Great Loop - Lake Havasu, AZ. - Lake Tahoe, NV - Lake of the Ozarks - Lake Powell - Grand Bahama Island - Abacos - Florida Keys - Destin/Pensacola - Clearwater Beach - Tampa Bay - Apostle Islands - Lake Monroe, IN. - Chicago Loop - Starved Rock to Peoria - Shelbyville, IL. -Panama City Beach - Lake Geneva - Cedar Lake Lake Norris, TN -

Thanks for this post! The throttle drop is probably the most annoying thing on these boats, and although I've learned to work with it, I will definitely try this when I get my boat out of its winter hibernation (assuming it ever comes to New England).
My Mistress has a great set of 1.8's, likes to play fast and loose, and loves a good time!
Jetlagged = Joe

I can't wait to do this, will be bringing my boat home in a week or so...I'll post my results afterward.
My Mistress has a great set of 1.8's, likes to play fast and loose, and loves a good time!
Jetlagged = Joe

I am going to try this soon. The throttle drop is extremely annoying and will prevent me from buying another Yamaha. Do the new Yamaha's still have this issue?
Water Witch Digital Hour Meters, High Water Bilge Alarm, Dual Group 27 AGM Batts.
Located in Beautiful Naples Florida
*** CLICK HERE FOR JETBOATERS.NET STICKERS***​

I have a 2014 and the left throttle has this issue.
MrLaneMeyer Lol I guess you guys with the new boats can bring it into the dealer and tell them to look at my thread.

mrlanemeyer said:
I have a 2014 and the left throttle has this issue.
Click to expand...

Has anyone verified the throttle assembly is the same in the late models?

I haven't heard back from any of the newer boats to know for SURE, but I can't imagine that if they have the same exact issue, AND are made from the same company, that it would be any different really.
My Bucket List and conquered waters.
Bimini, Bahamas - Lake Cumberland, KY. - Lake Michigan South Shore - Portage, IN. to Mackinac Island - Hilton Head Island - Much of the Great Loop - Lake Havasu, AZ. - Lake Tahoe, NV - Lake of the Ozarks - Lake Powell - Grand Bahama Island - Abacos - Florida Keys - Destin/Pensacola - Clearwater Beach - Tampa Bay - Apostle Islands - Lake Monroe, IN. - Chicago Loop - Starved Rock to Peoria - Shelbyville, IL. -Panama City Beach - Lake Geneva - Cedar Lake Lake Norris, TN -

Do yourself a favor and NEVER take your boat to surdyke yamaha...JUST DONT!!!