@Rana and I replaced the scupper valve on our SX230 last night. This was the procedure that we used. I would appreciate critique from others who have done this.

The scupper valve is located in the bottom of the bilge directly below the starboard water box (round aluminum thing). I choose to reposition the water box rather than try to work around it. 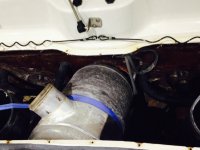 As I finished removing the factory scupper the outer ring broke off. This may have been caused by my pulling on it but I suspect that over tightening of the nut at the factory played a role as well. 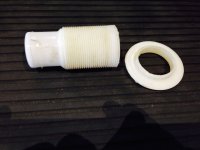 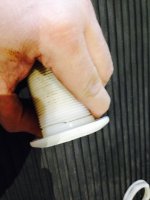 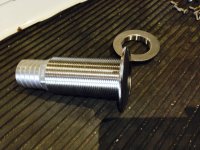 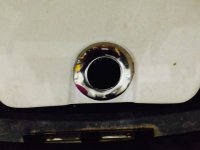 great write up, you may want to mention the new scupper mfg and part # and about having to grind the sides of the new scupper to fit
Check out this thread for known issues of "classic" style Yamaha boats (2004-2009)
(many of the links are broken because of the FAQ reshuffle, use the search button, top right of the screen with key words)
https://jetboaters.net/threads/known-issues-for-boat-years-2003-2009-with-mr1-engines.15464/

My replacement Standard Stainless Steel 1 1/2 Inch Scupper came from Great Lakes Skipper. Currently the photos show the brand as Premier. I do not believe that mine was branded at all. I ordered it over a year ago. It was around $55.

I did need to grind it on two sides to get it to seat fully.

@Jim Robeson You don't truly know its bad until it is a hole in your boat taking on large amounts of water. I highly recommend making this simple change for the safety of you and your crew. Very easy to do. I did my 08 sx210 and the plastic one was fine, but too many of them have sheared off during removal like Bruce's did.

How can I get on the scupper wrench list?

@loudog1001, please sign up for the wrench at Holder of the Scupper Wrenches.

@Bruce Great write up.. I would advise against putting any RTV on the nut. It can make it difficult to finger on. Better to run a bead on the inside wall of the transom that will set nice on the tightening. Also some real important events were not mentioned in your instructions. In between every movement there needs to be room for plenty of profanity. Not your run of the mill profanity..no no.. Make room for huge amounts the most profane language you can muster. You know the stuff. The kind of profanity that would get you a mouthful of Lifebouy if your mother heard you. The kind of language that would leave your kids speechless if the heard it. The kind of cussing that will stop your wife in her tracks where she can do nothing but smile at you and rub your back.. yeah, make room for some of that.. Oh, I almost forgot. You will be sore for a couple of days.. Great write up..lol
Last edited: Apr 16, 2014
2007 AR230 HO.....Still adding mods..Too busy boating to get them all installed..

Oh yeah. On 18 need to run RTV on the neck of the scupper before inserting drain hose back on. @Bruce .
2007 AR230 HO.....Still adding mods..Too busy boating to get them all installed..

@Lspeedss, why RTV? Is caulk sufficient?

By the time I got that far my entire scupper assembly was coated in caulk which I believe will take care of it I am planning to place the water hose near the scupper intake and test it for leakage.

@Bruce RTV is what I used..Im sure caulk ,life caulk, 4200 or whatever people place their confidence in is fine. Plus it was shorter to type RTV than silicone in using my Droid. Lol
2007 AR230 HO.....Still adding mods..Too busy boating to get them all installed..

Nice job. I had to do mine on my 2007 sx210 when I had it. Boat would take on water during the day to the point where the bilge would pump a couple of pints every few minutes. Checked everything, even the scupper and couldnt find anything. Finally examined closer and the scupper was split right around where the rubber flap was. Changed it and bilge pump never came on again.
Previous Boat: 2010 AR240 Audio Upgrades- Fusion headunit, (2) Wetsounds SD-2 Amps, Wetsounds SD-6 Amp, Wetsounds WS420BT, Wetsounds XXXV2 Subwoofer, (6) JL MX650 speakers, (4) Wetsounds Rev10 tower speakers, (2) group 29 marine batteries, (1) group 27 marine battery, Minnkota 210D onboard charger.

@Zeus2013 you should be ok, this is only a problem with scuppers below the waterline.
Check out this thread for known issues of "classic" style Yamaha boats (2004-2009)
(many of the links are broken because of the FAQ reshuffle, use the search button, top right of the screen with key words)
https://jetboaters.net/threads/known-issues-for-boat-years-2003-2009-with-mr1-engines.15464/

Great write up with pictures @Bruce . Thanks
[sigpic]373[/sigpic]

Nice writeup. I also made my own wrench out of a scrap of aluminum. Took maybe 5 minutes - it is not pretty. You should really use 4200 or 5300 3M marine caulk. RTV is not rated to be used below water line. To determine what shape the stock scupper is in try putting a trouble light inside next to it. You will see bright light thru the thin walls of the scupper - very confidence inspiring. The give it a wiggle. It will most likely break off in your hand - even more confidence inspiring. Obviously you should have a SS one on hand before you do these tests as you will not want to get in the boat until you have replaced it. Cam.
Boat: PPass, Pinned, Finned, Noodled, 2000lb Auto Ballast, SS Scupper, Inflator, Tow Valves, Custom Anchor.
Trailer: Welded Bowstop, Re-wired, LED lites, Backup lites, F2 Winch, F&R Boat Buckles.
Toyota Tundra Crewmax Towhorse


By the time I got that far my entire scupper assembly was coated in caulk which I believe will take care of it:eek: I am planning to place the water hose near the scupper intake and test it for leakage.
Click to expand...

The other test you want to perform @Bruce is to run about 10 gallons of water into the engine compartment with the boat on the trailer and the trailer jack cranked way up so the bow is high. This will cause the water to flow into the lower bilge. Make sure the bilge pump is off. Then observe the area around the scupper flange at the stern of the boat. If you made a good seal around the scupper flange and around the scupper nut inside you will see no leaks. I would let this water sit for an hour or two (2-3 beers) to make sure it's tight. I found a leak between my scupper valve and my white corrugated hose doing this. I had to double clamp my hose to the scupper valve to mitigate it.
Full SeaDek - Cobra Venom Ultimates with fangs - EZLocks - Ve Ve Guides - Tow valves (under cleanout tray) - Keel Guard - Welded Bow Stop - Boat Buckles - UBBs - Fulton F2 Winch - Stainless Steel Scupper Valve - ThrottleSync - Table legs Noodled - Nerf Footballs - Stainless Steel Drink Holders - Full Yamaha mooring cover.
You must log in or register to reply here.
Share:
Facebook Twitter Reddit Pinterest Tumblr WhatsApp Email Link
Top