Screwed up and found the sand bar.

So, we set off for a boat ride and dinner m heading south to Ocean City. Found crappy weather so decided to turn back north and explore an area where we'd not been before. (And here I keep thinking about how someone pointed out to me when I was learning to fly that accident sequences often come in three steps...)
We decided to explore a long reach at the north end of Assawoman Bay that goes back to some houses (with boat slips) about 4 or 5 miles west of where we were. Boating waters around here can get stupidly shallow very fast but, hey, there are boat slips there so it must be ok, right? (Mistake #1)
The stupid stock depth gauge is stuck on 2.3' depth. It's done that before. Shutting the power off and resetting it always gets it to wake up. I'll do that when we stop for dinner. (Mistake #2).
I give my wife my iPad with the local chart on it but she has her distance contacts in and can't read it. Oh, well, there are boats upstream right? (Back to Mistake #1)
The channel is getting narrower - still about 300', mind you - and I'm getting concerned.
So I decide to slow down (mistake #3!) and slow down to turn around.
Boat comes off plane and settles onto the silt below - but not until after ingesting a crap ton of bottom and getting an overtemp warning. I killed the engines maybe 5 or 10 seconds in (idiot's first reaction was to try to speed up and get back on plane... why, I have NO idea.)
The bottom around here is an extremely fine silt - it's smoother than rubbing compund, but silt nonetheless. - and quite deep. Getting out and shoving the boat to deeper water was not possible since you just sink standing in it, let alone get enough resistance to push or pull. We knew tide was coming in so we waited about half an hour and she floated again. Yeah, it was that close.
With fingers crossed, I started the engines up. Silt came out of the pee holes. Shit. No more than a couple of seconds' worth and followed by clear water but silt nonetheless.
Ran for about 10 minutes, heading back towards home, and stopped for dinner. Boat ran flawlessly, pee holes were clear, no temperature issues. After dinner, started right up and ran flawlessly again. Sigh.
Got home when it was dark, gave it an extra long flush, both with fresh water and Salt Away. Going down to check it out now - starting with the oil and intake filters.

What would you check/tear down, if anything?

PS: there may be some boats upstream but I suspect they're like all the outboards around here with polished, shiny skegs and propellers! Or they know better than I did and only go out at high tide!
"Mist.", 2012 Nautic Blue SX240, TVXLs, Tru Locks, dual Optima Blue Top batteries, Stolz roller, Guide Posts, Fusion 700+BT, Polk mm651ums, SeaDek, head compartment mods, more to come!

As long as you ran it hard so that the indicator lines were clear i would call it good,

.
Check out this thread for known issues of "classic" style Yamaha boats (2004-2009)
(many of the links are broken because of the FAQ reshuffle, use the search button, top right of the screen with key words)
https://jetboaters.net/threads/known-issues-for-boat-years-2003-2009-with-mr1-engines.15464/

Thanks @Scottintexas - hadn't thought about the thermostat. Makes sense. Will pull it next week end.
Yeah, did run it - not flat out but up to about 5500 rpm for about 5 minutes and all was clear. Total running was about an hour after "The incident" and then 20 minutes on the hose. I hope that's enough - all the pee was clear.
BTW, was cleaning up the inside today (we made a bit of a mess with our attempt to push it) and it came to me - the best analogy for the silt is it's just like laser printer toner! Or graphite powder. The stuff gets everywhere!
"Mist.", 2012 Nautic Blue SX240, TVXLs, Tru Locks, dual Optima Blue Top batteries, Stolz roller, Guide Posts, Fusion 700+BT, Polk mm651ums, SeaDek, head compartment mods, more to come!

@Scottintexas , thought you might be interested in the follow up... Your advice was spot on!
Pulled both thermostats - easy to do but would have been even easier if they weren't at the BACK of the engines. Both had some silt on them which was disappointing. One was operational and the other was stuck open. Not sure if it's been stuck for a while (I kinda' got that impression...) or if it was because of the beach event but regardless of when it happened it was NFG. And both looked like crap.
Local dealer had some in stock, for only a few $ more than Yamahasportsplaza so out they went. Bigger issue was finding Loctite 572 as called for in the shop manual...
Put both in, took the boat out for a ride and she ran and peed beautifully. 50mph no problem, no temp issues. 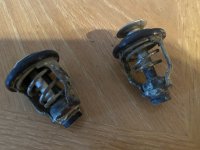