I added three zero degree rod holders, two were mounted 12” forward from the forward most 30° OEM rod holders, and the third was mounted in the transom behind the helm seat. These 0° rod holders I bought from Yamaha as the two OEM transom mounted rod holders are 0° 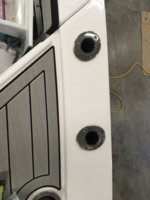 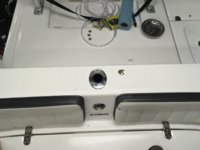 Interestingly there is a spot in the center of the transom where the non skid changes to smooth and it appears this space was intended for a 0° rod holder. 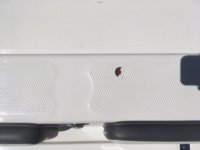 So, the reader has obviously noticed the chinger in the gel coat, and it’s circular shape, this was caused by a hail stone and will get repaired later this season when it is warmer. There was actually a void between the gel coat and the fiberglass.

The forward two 0° Rod holders are for rod riggers. I bought five Shimano Talora trolling rods, three 9’ and two 8’, two of the 9’ rods will be for these rod riggers and that gives a roughly 26’ spread on those lines. The transom center mounted 0° rod holder will use the third 9’ pole, and the two 8’ rods will be used in the aft most OEM 30° rod holders. We tested this set up last weekend and that spread works very well.

With this set up it is possible to put out another two rods in the forward most OEM rod holders for trolling, or to use my down riggers. Using the down riggers as well as different depth lures and line lengths will be a great way to cover a lot of water and depths!

Another thing I wanted to address was the fact that only the two forward most OEM rod holders had drains on them. All the other rod holders would drain any water that got in them into the bilge, in the case of two rod holders aft that are above the the aft storage compartments, any water that got into those two would end up in the storage compartments. I was scratching my head for quite some time trying to figure out where that water was coming in at, especially after one of my automatic inflatable life vests deployed in the compartment. One day I just happened to look down one of those aft rod holders and realized it went straight through.

In my search for thru hull fittings for my other projects I came across some universal rod holder drains on T-H Marines website. 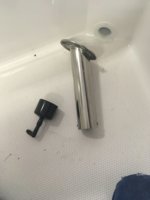 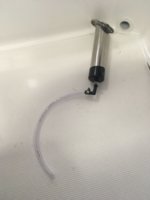 With these in hand I set about setting up rod holder drains for all of the remaining rod holders. The rod holders above the aft storage compartments were easy, the rest, not so much. There is no way to get to the underside of all the other rod holders, so, you have to tie in the drain hoses from the top, to say this was difficult is an understatement. It took numerous attempts at putting them together to get the hose lengths right so that hopefully they will drain correctly. On final assembly I also sealed up the bases of the rod holders and cup holders with 4200. 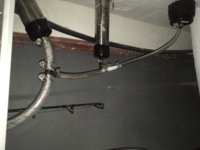 This is the starboard side aft storage compartment, the vertical clear tube is coming from the oem rod holder directly above, the clear tube on the right is coming from the other rod / cup holders on the starboard side including the new 0° rod holder in the transom. As you can tell these rod holder drains are tied into the new deck drains I installed. I used a 1.5” barbed splice, drilled a hole in the top of the splice and installed a 1/8th NPT / 3/8” barbed fitting. 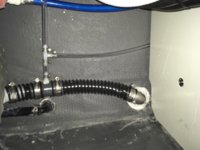 This is the port side aft storage compartment with the same set up as the starboard side. This side was a little easier since I could see the rod holders from the bottom. 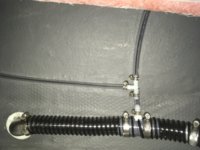 These rod holder / cup holder drains were a major pita to install but I do believe the juice is worth the squeeze. I should have dry storage compartments from here on out!