PLEASE DON'T POST-SHAME ME.
Long post but I'll try and be succinct.
I have a stock two-battery set-up in my 242 LSE and the previous owner put in two Interstate 24M-XHD cranking batteries in right before i bought it (3 yrs ago). The batteries are wired in parallel and, as best I can remember, when I took the batteries out for the winter, almost all of the wiring connections were on one battery.
I've been having issues with error messages on the Connext about the Electronic Drive and best I can tell it's happening due to low voltage. They are always on a two-bank charger so, theoretically, they should always be charged up when I go out.

I'm going to charge them here at home and take them to get load tested. I will likely go ahead and get two new ones which is where I need the real advice.

Would you recommend the same Group 24 size?
AGM or not? Is it worth the expense?
Both cranking batteries or any deep cycle?
My boat goes from the lift onto the lake to cruise/tube then back to the lift. I do not float and crank music.
I have added an additional Wet Sounds amp driving a sub so I've got 2 amps, 2 tower speakers and 8 interior speakers.
When I reconnect batteries, does it matter what connections are on each battery?
School me on what my switch selection(s) should be.

Thanks guys.
Sorry...this is the only pic I seem to have of what I had in there.

I'm not familiar with your exact model but I would expect that you have a starting battery and a house battery. The Amp should be on the house battery.

The only time the batteries should be in parallel is when the engine is running, the rest of the time, I would expect they be separated. This should happen automatically

Do you have a picture of the battery switch? That would help.

If you suspect low voltage, do you have a voltmeter to ,measure at the battery? Can you check the water level in the batteries?

Loose connections in the wiring often behaves like low voltage as well.
B

Here's a pic of the switch that is identical to mine.
I had previously checked voltage and one was 13.6 and the other 12.2.
I pulled them and brought them home and just went out and checked water levels. Looks like one battery's cells are all full and the other is low in every cell. 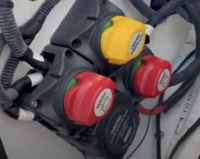 First, regarding the above picture, do you see the problem? The emergency parallel is in the on position. This should never be this way unless there is an “emergency“ where the start battery needs a boost from the house battery to start the engines, and is then turned off after the engines are running. During normal ops, house and start are on, and emergency parallel is off.

Next, the issues you mention about the error messages on the connext, these are from what I’ve read on this site related to low battery voltage.

The fact that you have a battery with low water levels is not good, are the plates exposed above the water? If so then it is toast. Question, which battery had the low water level on? Was it the one with all of the connections on it? If so is that the one that is connected to the “house” battery switch?

If you do not have an onboard charger then that is something that needs to be corrected. The charging system on our boats are not sufficient to re charge the batteries properly. You need an onboard charger with at least 10 Amps of charging power per battery, 20 Amps is better with RV / Marine deep cycle batteries whether flooded or AGM. Also, if you go with flooded lead acid batteries said onboard charger needs to have an equalizing charge function on it, this is crucial to keeping flooded lead acid batteries at their peak performance and making them last as long as possible.

Based on your described usage just stay with a group 24 size of battery.

I would put all of the connections back the way you found them.

Again, get a good on board charger with at least 10A of charging current for each bank. And there are several threads on this, take the operational power for the dvsr and hook it up to the switched side of the house or start battery so that the dvsr is in operative while the boat is on the lift and the on board battery charger is charging the batteries.

Thanks for the thorough response. Note: I see the issue with the above switch position but, again, I note that this was purely a pic from the web. I only have Emergency Parallel on when I'm stuck on the water and need the extra juice to start.
I do have an onboard dual bank charger as well. I'll end up getting two new flooded batteries in the spring and may consider a cranking battery and changing the other to a deep cycle, or dual cycle.
You must log in or register to reply here.
Share:
Facebook Twitter Reddit Pinterest Tumblr WhatsApp Email Link
Top