I see a lot of posts and they drill a hole in the side of the boat and then run the cable thru the upper tower hole. I would like to know if their is a better way. What about running wire thru the starboard-forward tower, but drill a hole thru the metal plate. (see front tower mount picture). Once wire is feed thru forward tower bar, then make hole and feed wire thru upper tower hole (see upper tower pic)...has anybody done it this way? Does any know if it will work? I don't want to put a hole in the side of the boat, id rather have the wire hidden.

tower isn't hollow at that point, you need to go through the hull

What about drilling a hole thru the plate and tower into the hollow portion, then use a fish to pull the wire thru?

w/that being said, I wouldn't do it....there is a reason that point in the tower is solid and why they are like that in other towers as well....that is the most stressed point, drilling two holes to intersect each other that go right through the bolt holes that are already there are going to make a large impact on structural integrity..... 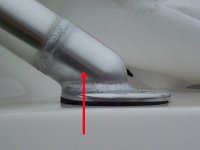 Is anybody 100% sure (no speculation) that the rounded portion to the weld is solid?

edit: a cut-n-paste from a post I made elsewhere...

I finally got around to installing the tow point navigation light this weekend. The assembly and instructions from Aaron are excellent. I wanted to add a few more details that may help anyone else doing it in the future.

I drilled the 3/4" diameter hole directly under the Navigation light. The end result looked nicely centered, but the angle of the drill to make a hole in the tower tube itself (inside) was a difficult angle. I drilled a 1/4" diameter which was too tight to snake the 4 wires thru, I followed it with a 5/16 diameter which was at risk of breaking thru the top weld. I would consider making the 3/4" hole more aft, making the secondary hole easier, possibly larger. 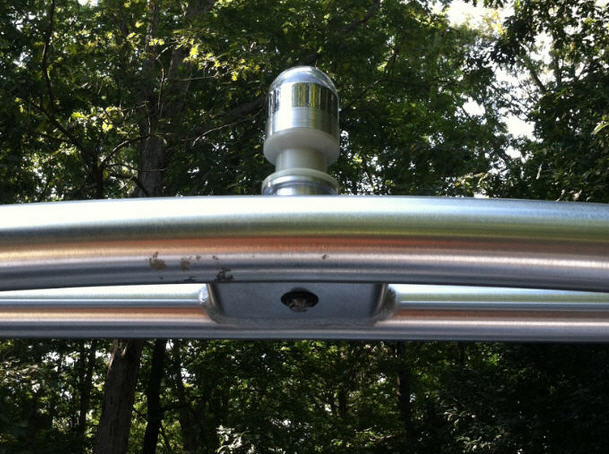 The next set of holes are drilled at the pivot point. 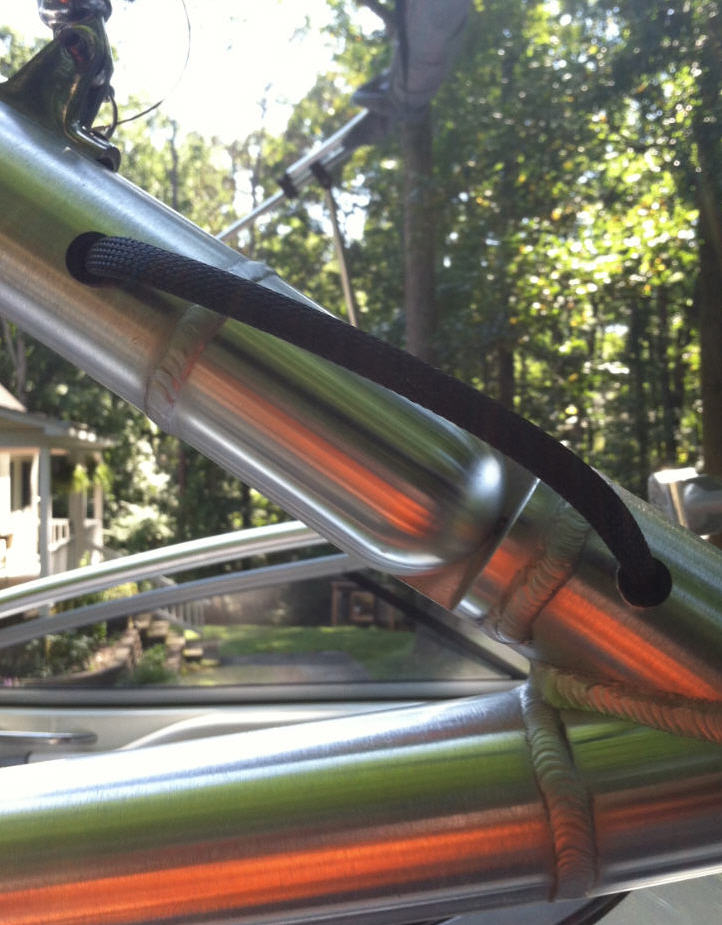 I wasn't sure how far in from the weld to drill that would allow me to clear the "plug"
The top hole was drilled 1 3/8 from the weld and cleared nicely., The lower hole I chanced it at 1" even and nicked the end of the plug... 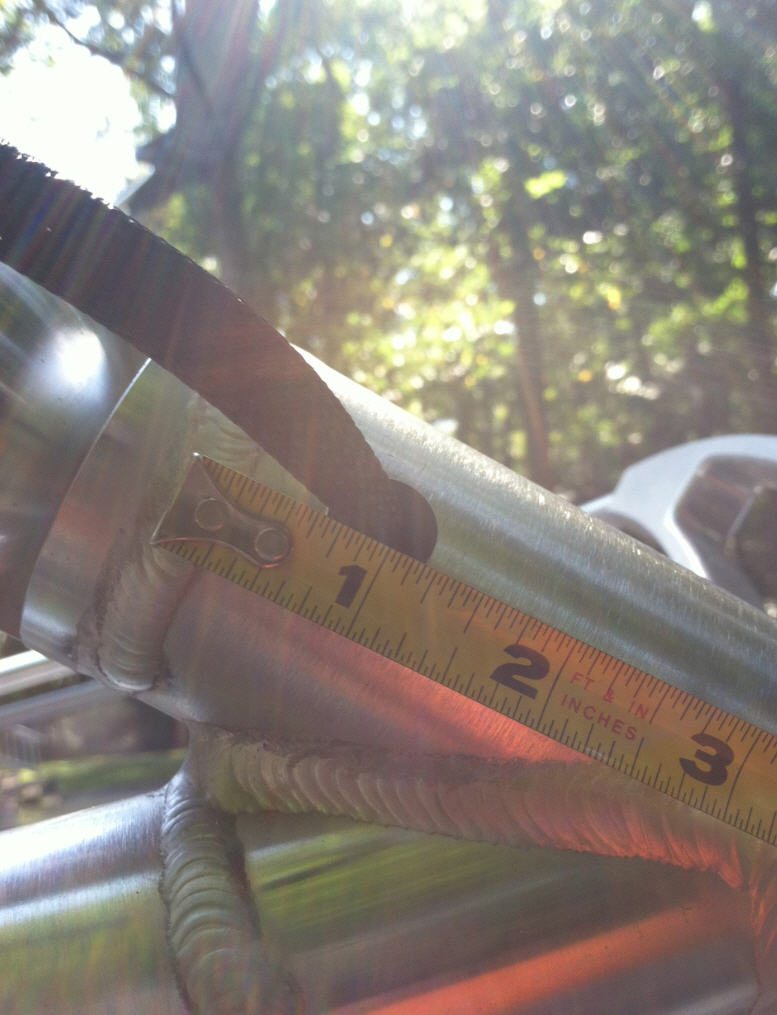 This image is the final drill from the tower tube to thru the deck. I found a watertight feed thru that dressed it out nicely. 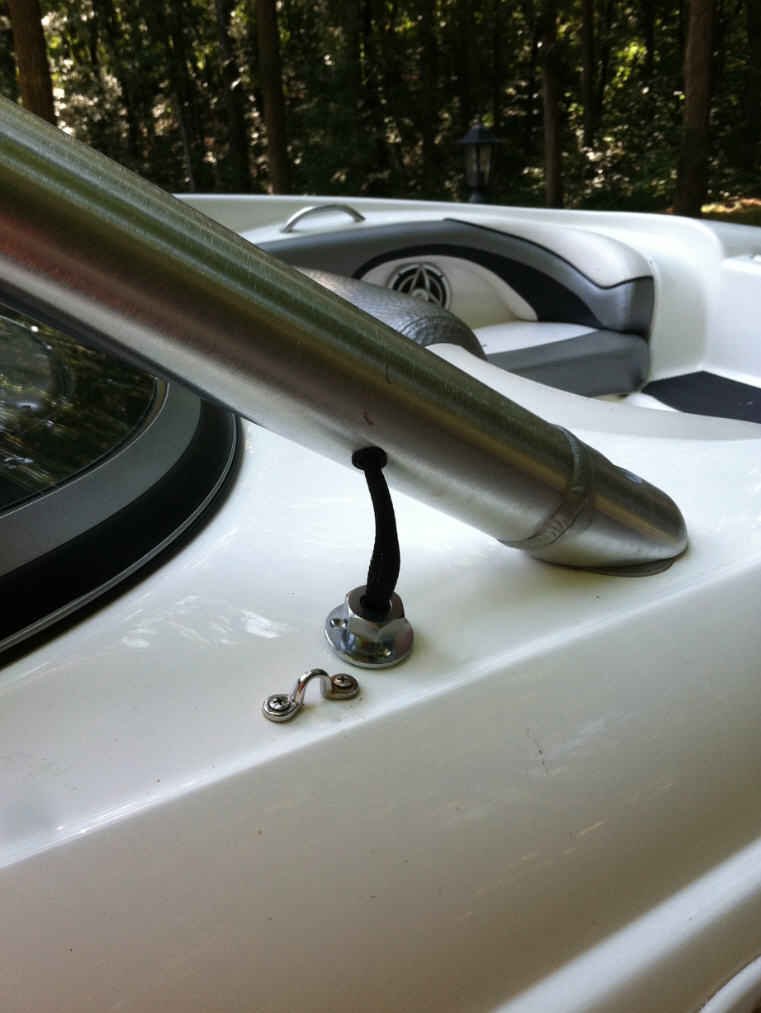 One thing to note: The run I made from the tower thru the boat should have been tighter to the mtg point, The mooring cover pulls on the wire more than I'd like.

To snake the wires thru the tower: a piece of tissue, fishing line and a vacuum worked nicely (tip from a member here). I did break one wire on the sharp edge of the inside hole, upon completion of the wiring I squeezed in some silicone to try and prevent movement or wear against those edges later.
Some of this may be redundant but I felt it important to identify the distance from the weld point, a misplaced drill bit could be dire.
All this was done on the Yamaha factory wake tower.

@Julian can this go in the tips sections, maybe as tower wiring,
Check out this thread for known issues of "classic" style Yamaha boats (2004-2009)
(many of the links are broken because of the FAQ reshuffle, use the search button, top right of the screen with key words)
https://jetboaters.net/threads/known-issues-for-boat-years-2003-2009-with-mr1-engines.15464/

Scottintexas said:
@Julian can this go in the tips sections, maybe as tower wiring,
Click to expand...

let me edit all my spelling errors...I mean key-bored malfunktions's
2009 212x, TVXL, Seadek, pretty stock overall
complimented by a Yamaha VLX110 Waverunner
All Pulled with a Titan XD Diesel.
shared with a rockin' family !
the Reaper calls me for his alibi

Absolutely do the shop vac and string trick. Suck the string through and then use it to pull the wire in....works like a champ. I went over to a buddies house and he and his wife were about to get a divorce because he couldn't get the wire fished through with her helping....I got his shop vac and some string and we had the wire through in about 15 minutes.....he still says I saved his marriage.
I'm Ken and I approve this message.

Scottintexas said:
@Julian can this go in the tips sections, maybe as tower wiring,
Click to expand...

Here is an update, my wire is ran through the tower, here are some pics. the vacuum and yarn is a must.

@PaulyB , I was wondering the same things, as you can tell by my posts, but was told its solid. After drilling a hole an inch up from the weld line, I think I hit the solid material, definitely more material inside. ( but I don't know for sure)

I see you have a 2008, does the mount look the same (I'm sure it does). Can you post a pic from underneath to show wire going thru the mount. Or maybe it is solid to a certain point but is can be drill thru fairly easy? ( my hunch)

I think this will be very helpful for any other 07-09 AR230 owners running wiring thru the tower.

I dont have a pic. I took both sides of the lower tower mount off of my boat and looked for myself... You can actually just unbolt the four bolts on the front and lift it up enough to see under it. The hole is about 3/8 of an inch and is directly in the middle of the mount. I had to enlarge with a 1/2 in drill bit so the tower wiring could fit inside of it.... I wouldnt suggest doing this without removing the tower off the boat first. I am taking the boat out today and will try to get pics of the wire coming down through the tower mount... 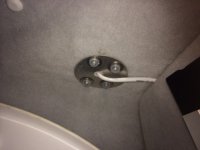 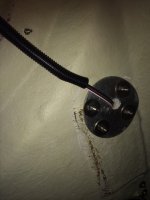 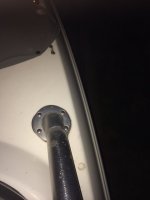 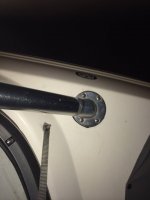 This forum should be posted on helpful hits link for the next person trying to run the wire in the the tower of 07-09 AR230.

I'm looking into my next mod and this is it , how do u run wires around the first hinged point ? What siZe hole ?

@Aaron Stammet . The upper tower has a factory hole. I only drilled a hole for the size of wire I used for the lower tower ( maybe a little larger). I used wire that had a quick disconnect so I could remove the top tower if needed.

I strongly recommend using a vacuum to pull yarn thru tower first. If you see my pictures it should help. Let me know if you have any questions, I'm glad to help as this was a challenge because I could not find any information. (I worked at a car stereo shop for 10 yrs, about 15 yrs ago, and this was still a nice challenge - not straight forward)
You must log in or register to reply here.
Share:
Facebook Twitter Reddit Pinterest Tumblr WhatsApp Email Link
Top