I’m located in western NoDak and I’ve got my mind reeling on a FSH Yamaha. Reason is, I currently own a (older) Lund Pro V and a recently inherited a pontoon. The more I look at the Yamaha 210 FSH I wonder of it couldn’t fit the bill of a fishing unit 70% of the time, and 30% cruiser/ski boat.

biggest question I have is, can you troll with it? If I ever actually pulled the trigger, I’d run a 112 volt electric motor up front. At 3,000 lbs, it’s not a real light boat. Does it track well? Were other posters able to find a happy medium running the engines in no wake and using a motor up front?

I mostly fish by myself. If I do have people with, its 90% of the time ONE other guy. I think just twice last year I had three of us out at the same time.

any freshwater guys that can chime in? Typical species targeted is Walleye

I'm quite interested in what replies you get on this also. While I've got a 23', my brother has contemplated bumping up from his 19' Malibu to a 21' FSH.
J

I do not have any experience trying to fish from mine but I have fished out of our dedicated fishing boats a lot.

I would expect to really hate any Yamaha jet in a stiff breeze using an electric trolling motor to fish a bank. With no lower unit in the water and no real keel I would expect it to blow around like a john boat with no motor on the back.

As far as trolling, keeping the engines in synch might also be a bit of a pain even at really low trolling speeds. However, I bet you could keep a really consistent speed with a Hydrophase ridesteady (or similar system) installed.

You can use the no wake mode for trolling at up to 5 mph and I just bump 1 throttle up when I want to throw faster.
trolled for hours yesterday it was great. End of day used light tackle and was able to back down on fish and follow them, great boat to troll alone in. 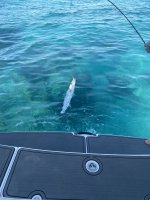 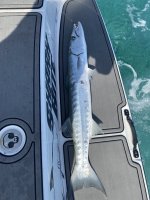 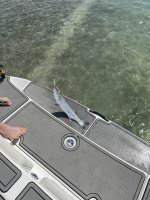 Coming from walleye fishing for decades in a Lund in Central MN, I can't imagine being able to troll a Yamaha. And I have tried this in two jetboats. It usually boils down to controlled drifts and not actual trolling.

Walleye trolling is many times measured in .5mph increments. So trolling at 5mph is many times only used when pulling cranks or down riggers. But usual max troll speed for walleyes is half that. If I was pulling riggers on Sakakawea, it may work.

As far as tracking, with no outboard as a rudder, this thing will be all over. A trolling motor would be required for sure, but keeping that stern in line may be difficult. I'm sorry, I grew up 15 miles from the Lund factory. So A pro-v, even 20 years old, in just about any configuration is a better walleye boat than any jet.

My best fishing from my previous jet was up North of Winnipeg on the Red River fishing Channel Cats. It involved anchoring, but still then, the current would make that stern swing like crazy, and stern anchors were out of the question when fighting 20-30lb cats. They went where they wanted to.

Good luck, but get out on one if you get the chance. I do believe Vallely is still a yamaha dealer. Good luck this season as well, open water is getting closer!