how to Remove the Impellers (for dummies)

my starboard motor suddenly sounded/looked like it was going to shake itself to pieces at idle, but would smooth out in No Wake mode or higher. a plug change didn't do any good. with it on the trailer, i noticed a squelch at shut-down. i figured it was something with the impeller, so i pulled the pump assembly (it comes out very quickly) and found the wear ring was binding on the impeller:

i chose to pull the entire pump as one assembly. i think this gave me a little more leverage in breaking it free from the transom plate. remove the one bolt for the steering cable and the two bolts for the reverse gate (or undo the spring clip). then there are four large bolts and one small bolt (near the coolant intake) that hold the pump assembly to the plate. with everything disconnected, you may need a deadblow hammer to loosen the pump from the plate (there is no silicone). once it breaks free, carefully slide the assembly out:

NOTE: at this point, you could just skip down to the bottom of this post to remove the impellers. i ended up doing a complete break-down to replace one of the housings and clean everything up...

remove the two small bolts that hold the "deflector nozzle" on (the one with the reverse gate attached). i found the best way to remove the four long bolts was to simply lay it on the floor for leverage. just place one foot on the assembly and push down on the wrench:

now tap a thick chisel between the tabs to separate the nozzle. be patient and don't get aggressive on the tabs, going from one set to the other as it slowly works itself free. be careful not to hit the mating surfaces with the tip of the chisel. if the chisel is too skinny, you may need to find something else to wedge:

use a deadblow hammer to separate the remaining two pieces (ignore how i am holding the hammer for the sake of the picture). work your way around until it lets go:

here are my two impellers (note the different pitches). port is marked with grooves from the factory:

the impellers seem pretty beat so i'm going to exchange them for refurbished ones. i was surprised to find my port housing already has a plastic wear ring assembly from a previous owner (probably suffered the same fate). the starboard one will be replaced with the same type (i think it is SBT and they are local). longevity of steel vs price of plastic? this job is quick and easy - i would not have a problem replacing the rings at the beginning of every other season if wear becomes that much of a concern. the rings slide in and out easily - you don't even need to break down the assembly to get to them.

i'm guessing my impellers have been on since day one. so while i waited for my impeller shaft tool (mine was Solas WR007H), i sprayed a little PB Blaster into it and tapped it with a wrench each day. not sure how much this actually penetrated, but it definitely can't hurt. if this doesn't work, you can try lightly heating (not melting) the center of the impeller with a torch and letting it completely cool (repeatedly) to help break up the corrosion:

the hardest part is breaking these suckers free. you're probably going to need a solid vice on an even more solid bench. i have a big vice, but it's mounted to a lighter bench. instead of trying to use two wrenches with two people, i came up with a little trick that is more stable than two people working against one another. i unbolted my vice and placed the impeller tool in the vice with the assembly lying flat on the floor. then lowered my tire onto the vice just enough to hold it in place (cover the edges of the vice with a thick layer of towels to prevent any tire damage):

the impeller threads are reversed ...and they were on tight. i think i was nearly flexing the shaft on the port assembly. if you're not using a breaker bar, put on gloves, wrap the wrench with a towel, and give it all you've got. my stock impellers required a 27mm wrench. you can use a large crescent wrench, but i prefer a box end in tough situations like this to prevent slipping/damage. the following picture illustrates removal of the impeller:

assemblies are separated and the impellers are ready for exchange:

the impeller shaft can only be separated from the duct (the part with bearings) with a press ...disassembling this portion is not necessary for impeller replacement.
Last edited: Oct 10, 2014
SOLD: 2005 AR230HO
(2021+ no longer boating)

Make sure you open up the cones on the other side of the impeller shaft and inspect the grease for water intrusion and make sure they are greased well. If not, you'll need to press them apart and replace the seals and possibly the bearings. Details of that here.
https://jetboaters.net/threads/impeller-bearings-trashed-lots-of-rebuild-pics-pg-6.2822/page-6#post-56922
I'm Ken and I approve this message.

Six posts, and they are all great! Keep them coming!

@Big Shasta, great bearing rebuild link there. thanks.
i'm also planning to switch to an oil bath when it all goes back together.
SOLD: 2005 AR230HO
(2021+ no longer boating)

Cranky,
That starboard impeller does not appear to be factory pitched. It is certainly different than mine. Was the boat pulling to one side or the other?

buckbuck said:
Cranky,
That starboard impeller does not appear to be factory pitched. It is certainly different than mine. Was the boat pulling to one side or the other?
Click to expand...

now that you mention it, it does seem like a drastic difference... I don't think I could tell a difference in mine.
I'm Ken and I approve this message.

I think you could have saved yourself some work by only removing the outer 4 bolts on the pump, not the ones that attach it to the transom. This would have saved you from having to pry the parts apart on the floor on their own with a hammer (doing it on the boat is easier....although some have had some interesting challenges getting it apart on the boat).
Julian
FAQ/References-Look here for answers! ______Forum SWAG-Stickers/shirts etc_____ My Favorite Forum Features
Yamaha 242X(<<Click here for a list of all my mods), YouTube Channel, Stoltz bow roller, Smith trailer guides, Sub volume control, hanger in helm storage, papertowel holder on storage door, Jetboaters spare tire cover, Dual USB Charger and fuse block, JL Speakers at the Helm, Garmin 541, VHF Radio with Shakespeare Quick Connect and external speaker, Extra Seadek pads Stern/Bow, gunnel Rod holders, Wetsounds Amp
Sold my 2005 SX230:PerfectPass, Cobra Fins, Dual Batt. w/ACR, Boat Buckles, Garmin 541s GPS w/RAM mount, Clarion M502 Headunit with Remotes, Camper/Cockpit/Bow Covers, Bilge & Fume Alarms, Guide Posts, BlueSea 4gang Switch, Fender locks, 6.5" Polk DBs-bow/cabin & 6x9's in Cabin and Fusion 4" on stern, Cabin LEDs, KeelGuard, dual bank chrgr with through hull, Garlick adjustable height seat pedestal, Spare tire and new jack, Airdock and SeaDek Titanium swim deck, Stainless Scupper, Bimini Quick Release. Owned an '03 Yamaha LX210.

buckbuck and Big Shasta: i'm pretty new to boating altogether - i've never seen a matched pair sitting side by side like this (not that i've looked for it). i knew they were different pitch, so i just assumed this was stock. i really have no idea. the only thing i know for sure is the port has been converted to a plastic wear ring set-up. i'm going to be taking them to SBT personally for exchange, so i should find out then (though it could be a while - lots on the list to do). it doesn't pull though: runs in a straight line when the RPMs are equal ...crap, unless i'm compensating with the steering and didn't realize it. haha, now i'm curious and gonna have to do some digging.

that's a good point Julian . might be easier to try to get the nozzle off, then pull the rest and use the deadblow on the floor to separate the last two (that worked really well).
SOLD: 2005 AR230HO
(2021+ no longer boating)

okay, i'm looking at my pics again. i think you might be seeing the left side (in the pic) of the starboard impeller "turning down" a bit. that's just the perspective of the photo ...both sides are similar to the right side which is very slightly turning up at the tip when compared to the port impeller. that's correct, right? i couldn't find any images online to compare.
SOLD: 2005 AR230HO
(2021+ no longer boating)

CrankyGypsy said:
okay, i'm looking at my pics again. i think you might be seeing the left side (in the pic) of the starboard impeller "turning down" a bit. that's just the perspective of the photo ...both sides are similar to the right side which is very slightly turning up at the tip when compared to the port impeller. that's correct, right? i couldn't find any images online to compare.
Click to expand...

I see what you mean, they are turned differently so it could be just messing with my eyes. I wish I would have taken a side by side pic of mine.
I'm Ken and I approve this message.

Ya, guess it could be an optical illusion. Here are mine from a few years ago. 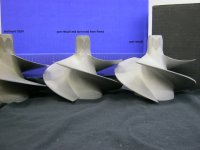 Julian, i hadn't even realized my content is more involved than the title suggests.
(updated my original post)
SOLD: 2005 AR230HO
(2021+ no longer boating)

Julian said:
what are you going to use to clean the pump parts?
Are you also going to repack the cone bearings while you have it all apart and on the bench?
Click to expand...

i'm going to try vinegar to clean it. i did a really quick spot check with a toothbrush and it removed most of the "chalkiness." not sure if i can get every bit of discoloration off and bring it up to look like it's only been in fresh water, though. i might try letting the parts soak a little while. i'll post it up when i try it out.

CLEANING: the vinegar doesn't work. i've read of owners using vinegar to help clear out deposits in the engine and i'm thinking that is a waste of time. when i tried to remove the impeller housing scale, it appeared to help remove it, but i was wrong. after it completely dried, most of the scale was still there. using dry #0000 steel wool did a decent job, but it's hard to get in the corners and quickly becomes tedious. i also tried Bar Keeper's Friend (which is awesome for removing rust stains on gel coat and polishing stainless) and CLR (it says not to use on aluminum, but i tried it anyway) with only slightly better results than vinegar.