How to replace Reverse Gate cable

The cables I ordered were TELEFLEX CCX 63317 or TELEFLEX CC63317 for my 2005 (same part#--the one with the X is the latest version of the cable). I bought them from iboats.com for $44 each. Search for "3300 xtreme control cable", then chose the 17' version and you'll see this part number appear...their search doesn't find the part number! Here is a direct link (buy it from the vendor with the best price plus shipping--which for me was iboats--shipping was FAST TOO):

I used the service manual Hull and Deck schematics for my 2005.

I'm used GVANs step by step and enhanced it with photos....See the photos with directions here:

2 Remove the 4 screws from the plastic binnacle cover, then remove the cover (mine was a PITA to get off--there are 4 little pins in each corner that hold it on). 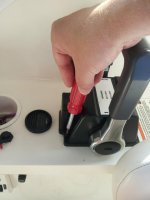 You can just see the pins in this shot..the left pin is off, the right pin is still holding the cover down.... 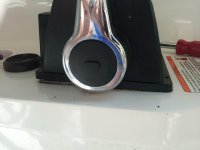 Then remove the 4 screws holding the binnacle in place. The shift binnacle housing did not come out easily after removing the screws. Be patient and wiggle it out. 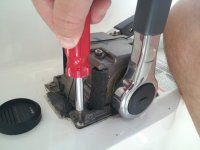 3 Remove the three long screws that hold the two binnacle housings together. (this was where I had a 1-1.5 hour ordeal as someone before me had sheared off a screwdriver tip in one of these screws--I was able to rotate the two binnacle to loosen it up--took me a while to think of this--This pissed me off so much I stopped taking photos...so the next bit has no photos! Sorry)


They are two separate housings. 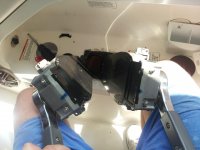 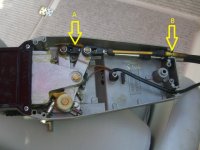 Now I have a 2005, so accessing the space between the under seat section and the bilge area is easier as I have a storage hatch and access plate. So I fed the cable from the under seat section, forward to the binnacle hole easily, then fed the new cable back to the bilge are easily also. I did need my wife to grab the cable through the clean out hatch tray. In hind sight it is probably easier to fish it from the stern all the way forward....but this worked ok for me.

4 Need to remove the bilge hatch cover where the cleanout cans are. There are a bunch of screws. To get the cover / hatch out of the way, I had to disconnect the drain hose clamp once all screw are removed

5 I pulled rear of the old cable into the inside of the hull / bilge area prior feeding the cable from the front. You will need to cut some zip ties to get the old cable out. So be sure you have some new ones to secure the new cable.

6 GVAN's directions say "Thanks for emphasizing that the cable ends (front / rear) are indeed different and I avoided feeding the new cable through backwards thanks to you." THIS COMMENT BAFFLED ME...I CAN SEE NO DIFFERENCE in the cable ends. I think older model boats might have had different cable ends. I've been asked about this later in the thread and by private message by other members-I saw no difference, and neither did they!

This is how GVAN did it....I didn't join the cables and just fished it on its own.
7 To connect the old cable to the new one to feed it from the shift area to the stern, I put a 3 inch small hose over two cable ends including the small nuts on each end (old and new). Then I used small tie wraps to tighten the small hose so the cables would stay connected. Then I used electric tape to cover the hose and tie wraps where the old/new cables connected to prevent snags while feeding the cable. I had my wife push/feed while I pulled. No problems. If it gets snagged, wiggle it while pulling/pushing but don’t force it…you don’t want the cables to come apart.

7a Undo the reverse gate--this is tricky if you don't know how the clip works. It is spring loaded and takes a thumb nail or a screw driver to get it squeezed together (see the photos). 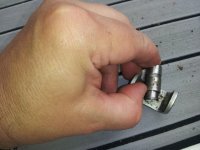 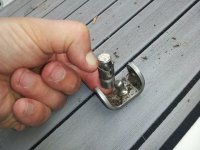 Once you have the gate disconnected, remove the connector (count the rotations to get it off), then the nut, then the boots, plastic hull cover, washer and white plastic clip (that looks like a white plastic washer but is actually a clip-see the photo below) and push the old cable into the boat. 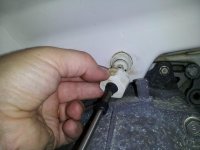 7b thread the new cable out, and re-assemble (see the photo). Again, put the connector on with the same number of rotations.

8 You need to put silicon on the inside of the hull where the cable comes through the hull.

I'm in the process of changing the cable on my LX so I wanted to add a couple of things I found on my boat. (@Julian--hope you don't mind I borrowed a couple of your pictures for illustration).

The plastic fitting #2 was stuck tight so I had to cut off the old cable at the #1 spot and use a 1 1/16" socket with a swivel and a couple of extensions to unloosen it enough to get it off. Second, I didn't realize the clip, #3, was actually a clip, as you can easily see in the photo above, so it took me a while to figure out how to open it.

Finally, the port side cable I was changing was actually connected to the starboard side of the shifter for some reason. It took me a while to realize this but I wasn't having any luck trying to pull through the new cable so I tried pulling on the other old cable and the new one came right through. (I didn't have to cut any zip ties.)

I ran into a few problems but overall it wasn't that difficult of a job.

@xoomer delighted my pics we useful.....I should have noted in my write up clearly about that white "clip", it challenged me too until I realized it clipped on.

Anyone know the answer to this?
Click to expand...

cwoav8r said:
Not sure if this has been answered yet or not... while researching the Yamaha part number for my boat, I came across the SBT website that has it listed, F2A-U149C-00-00 and according to the description it is 216" long, so... 18'.

Makes sense that it is a foot longer because of the aft tilt of the binnacle. So using that information, I am tempted to pull the trigger on a much needed cable using this part number: CCX63318.

I'm ordering today, hope to install this weekend, soon we will find out if this is correct for the '07-'09 boats. Here is what I have found out:
The cables are made by Teleflex)

NOTE 1: MAKE SURE THAT YOU SECURE A LINE OR THE NEW CABLE THE STEERING AND REVERSE CABLE BEFORE PULLING THEM FOR REPLACEMENT!! YOU WILL BE SORRY BECAUSE THE FEED IS DIFFICULT
NOTE 2: Make sure to use 3M 4200 to seal the holes that the cables run through to prevent leaks.
NOTE 3: Removing the steering cable nut on the back of the boat was tricky. I purchased a Kobalt pass through socket which did the trick. 1-xtreme Access Ratchet 1/2" #0379803, 1 Universal Socket 7/8" 22mm #0183694, and 2 xtreme access 3 inch Extensions #0049887. I purchase these tools at Lowes. I also tried the craftsman but the did not work because the socket was to shallow.
NOTE 4: If you don't have a 2008 and want to verify what Teleflex cables you will need remove the plastic tray in the rear hatch (where the jet pump cleanout plugs are located). This tray has about 16 screws and is sealed with silicon on the edges. You will see the cables there and the part numbers are stamped on the cables.

Once you have all the tools and parts then you can call friend over (the one that always comes along for boat rides), purchase 12 pack of beer, turn on music and spend 2 to 4 hours changing the cables depending on mechanical skill level and how many beers you are drinking.
_________________
"Knot-A-Yacht" Bradenton Fl. -2008 SX230HO,Cobalt Blue/White, Cobras,Cobalt Blue custom deck covers,Dock lights,Garmin Coastal GPS,Throttle Sync,TrueLocks.Dual batts with Perko Plus ACR,Guest 10amp dual charger,IC-m30,JLmx630,+XD700/5 amp,JL 10" driver, Clarion M-502,ICOM Model IC-M34 receiver,blue LEDs, Boat Buckles,2010 Toyota Crewmax
John Zarrella
Lake City, Fl.
'08 232 Limited
'18 Jayco 295BHOK
'17 F-250 King Ranch

I recognize that binnacle
I'm Ken and I approve this message.

Big Shasta said:
I recognize that binnacle
Click to expand...

Would these be the same cables for an 04 sx230. My boat is real hard shifting from neutral to either reverse or forward.

clint6760 said:
Would these be the same cables for an 04 sx230. My boat is real hard shifting from neutral to either reverse or forward.
Click to expand...