In the rush up to the Bimini trip I installed this refrigerator in our SX230. This has been on my to do list for a long time as getting ice often adds a lot of extra time to our outing prep. I even considered installing this or a similar unit in our LX210. The total cost was a little under $600.

Prior to installing I a ran a test in my garage to see what the battery consumption might be. I used an Interstate Group 27M deep cycle battery which is around a 100AH battery. The voltage decreased from 12.64 to 12.35 after 27 hours of running during which I opened it approximately four times to check the temperature of the water bottles I had placed inside and to drink one which I found to be pleasantly chilled. The voltage drop equates to 95% charge to 70% charge. So around 1% or 1AH per hour. I have two group 31 batteries in the boat so I should be able to run it without any charging for four days before triggering the low voltage disconnect. The CD-030 has a LVD built in and I have Blue Seas LVD on my house circuitry.

The CD-030 has a detachable compressor on the back. I thought that I might need to detach the compressor and mount it to the side of the unit to make it fit. Fortunately it fit without doing so. The exterior dimensions are 17"W x 9.8"H x 28.7"D including the compressor.

The best price I could find on the unit was from http://www.suremarineservice.com/CD-030DCW.aspx?gclid=CIHCirmJvL8CFc3m7Aod3DIAuA . They shipped promptly and it arrived a few days after ordering.

This is how it appears installed. Please notice that I had to remove part of the rear of the cushion above the refrigerator. I had not accounted for this and was probably the most difficult part of the install. 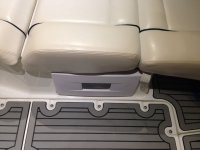 And this is the drawer full of drinks. If you count there are 29 inside. The back left is a starbucks refresher which is a tall can. In front of it is a coke zero can. The control visible top right adjusts the temperature and I understand is capable of turning it into a freezer, it also turns the unit off when turned all the way to the left. 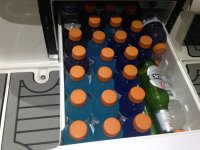 Under the seat I enlarged the hole for the mesh cut in that was previously in this location and used a double stack of 2x4s to shim the back and a 2x4 and piece of 1/2" plywood to shim the front. 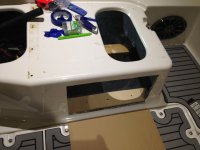 The mounts that came with the CD-030 would not mate to my shims. I drilled new holes in them. I was able to install mounts at the front and back of the unit on the aft side. I could not get to the fore side to install mounts so I decided to test it with mounts on one side. So far it has worked very well and that includes two Gulf Stream crossings.

In the open drawer picture you can see that I installed (caulked down) aluminum angle under the bottom edge of the CD-030 before installing. I plan to install aluminum trim around the unit in a picture frame style. The remainder will be screwed to the fiberglass and serve to further secure the unit and support the fiberglass.

For the Bimini trip we took a marine ice chest to transport groceries and the hams to Bimini. After unloading the ice chest we gave away our ice and did not need ice for the remainder of the trip. The CD-030 served us well. It always held enough drinks and food for our family of four. I even put our freshly caught fish into zip lock bags and then into the CD-030. I checked an hour later and found them to be fully chilled. I had planned to precool drinks in the room them add them to the refrigerator but most of the drinks never made it out of the boat and we used the CD-030 to cool them. On our return trip we had some steak and pork chops that we had not eaten. We placed them in the CD-030 Saturday morning and they were still cold and it was still running when we unpacked them Monday night.

We took my parents and two nephews out on Lake Ouachita earlier this week. We packed drinks and lunch for our group of eight into the refrigerator. When we pulled out at the ramp we still had cold drinks for everyone in there.

This is probably the best accessory I have ever added to our boat.

Dang! I really like that. I just don't know if it would be worth it for me. But, it sure is pretty cool. Good job, Bruce!
Mantus Marine Products Dealer - www.GetAGripAnchors.com 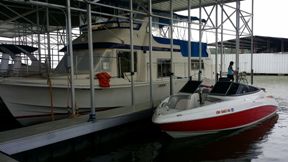 Nice, just when I thought I'd seen it all regarding mods for jet boats.

Ronnie said:
Nice, just when I thought I'd seen it all regarding mods for jet boats.
Click to expand...

Gym said:
Pretty slick @Bruce. The only problem I see is yours only seems to have room for ONE BEER.
Click to expand...

There is another one below it.

But best of all, there was a bottle of Blue Hawaiian in there over the 4th of July weekend that just kept getting refilled.

That is awesome!!!
50/50 Owner of Gantlin Products LLC. , Producer of "The Wake Wedge" for Yamaha jet boats.
www.wakewedge.surf Dealer for: FatSac Contact me for pricing or custom bags 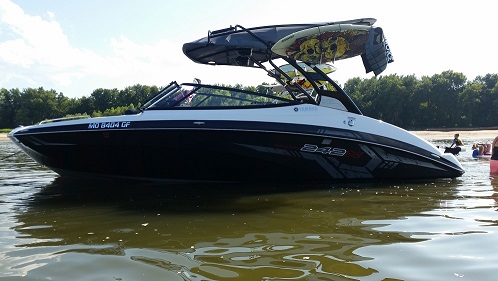 @Bruce Any problems with the door sliding open when hitting chop or making tight turns?
Mike

96Pirate said:
@Bruce Any problems with the door sliding open when hitting chop or making tight turns?
Click to expand...

No. The door latches in place well. It is designed for marine use.

Very nice install @Bruce . I am glad to see it all filled up and how it looks. We hardly use all that we take to the lake when we go out, except for our food, snacks, and vino, with exception to our iced tea and a couple beers while swimming. I generally take about 4 beers (tall bottles), one bottle of vino, 2 liters of water, and a gallon of iced tea. Sometimes we go through all that tea, sometimes we don't, but Chester likes his water cold too on a hot day, so all that water is in the cooler. I need another cooler as a matter of fact. After you had said you were installing the fridge, I started trying to figure out how it would benefit us and whether we could fit our stuff in it. When we take more folks out with us, we would have to add more beer, another bottle of vino, and possibly more water. It seems too small for that, but based on your findings, maybe not. I am a traditional overpacked and HATE not having something I wish I did. Clara on the other hand, hardly ever adds or requests anything, instead saying she only needs one or no beer at all...then she may have only one or maybe even two on a hot day. But I am the problem...I can't seem to trim down the shopping list! I see the bottles laying down, so guessing they won't stand up and of course the wine bottles or gallon jugs won't. I actually have two 1 liter bottles I use instead of the gallon on occasion. We like ice. I fill a glass with ice and enjoy both water and tea over it, and I don't drink much beer at all, but we do enjoy a glass or two of vino. I chill the vino, even quality reds, as they come out of a wine fridge, but they are likely to be WAY COLD when put in a cooler full of ice. We have found in most of our boating, that first glass is a bit frosty, but as the bottle stays out, it ages nicely. Two of these drawers would be great, and I suspect that a 24 can AO Cooler full of ice to serve our need for iced beverages would be easy, and would last much longer without the duty of actually keeping cans/bottles cold. We are going to have to discuss this mod-o-mania you have and what it is doing to the masses, particularly me! At first glance, I know I am going to love the Fusion units, but they haven't been put to the test yet. Enjoy that fridge, and again, great idea and install, as well as write-up!
[sigpic]4[/sigpic]
Mel
txav8r

@txav8r, I would love to have a bigger fridge on the boat. But it is the largest model that I could find a place to install. I considered using much of the area in front of the helm to install a dorm fridge sized unit. But that would have required fiberglass work and replacing the wind block with a new design.

So far I have found that without the need for ice to keep it cool you can put a lot more food and beverage in the fridge than a similar sized ice chest. The largest groups we have had on the boat using the fridge were a group of ten people on the boat on a night time fireworks outing where we had gatorade and adult beverages (beer + liter jug of Blue Hawaiian) in the fridge and eight (4 adults, 4 kids) on the boat with lunch and drinks in the fridge for a six hour outing. On each of those trips we came home with drinks left in the fridge.

As for wine I expect that we will turn down the temperature and put champagne in the fridge for some adult outings. Wine bottles will fit fine. As for drinking red wine chilled, that is a matter of personal preference that many would disagree with

Fueling your to be rediscovered mod addiction, I would like to point out that there are at least two other locations that the same unit could be installed. I installed the unit on the port side as that was space that we were not otherwise using. You could easily install a second on the starboard side. The third would go under the helm opening toward the drivers seat taking up space that is likely unused as well. So you could have one for beer and soft drinks, one set to 45F for your white wine and the third set to 65F for your red wine. Perhaps you could turn the white wine fridge down a little and store ice in there as well or why not install a fourth. They are only 50 pounds each.

@Bruce : This is an incredibly IMPRESSIVE mod.
Glad you posted all of the excellent details.
While many would claim it's not "for them," it IS for many others.
And frankly, I have never seen such a project suggestion for pleasure craft like ours.
Congratulations and NICE JOB !
Mikey Lulejian - Lake Oconee, GA
Passed Away 11/21/2015
"MISS B'HAVEN": JBP RED Thrust Vector XV's, Extra SeaDek; Minn Kota MK-330PC 3-Bank Charger; OPTIMA Blues; CIPA® Clamp-on Vision 180 Mirror; Bow & Cockpit Covers; JL Speakers; JL Amp; Rockford-Fosgate Amp/SubWoofer.
SKEETER Bass Boat by Yamaha - with Yamaha VMAX 150 Power, keeping us an all-Yamaha Boating Family.

I'm sure that you know that posts such as this is what gets us in trouble....

My wife wants to know if the small inverter I have will work so she can bring her K-Cup coffee machine along.....

I'm sure that you know that posts such as this is what gets us in trouble....

My wife wants to know if the small inverter I have will work so she can bring her K-Cup coffee machine along .....