I was camped out on the lake this week. Stepped on the back of the boat. Hear a bunch of moving water and the bilge turns on. Figure its just 3 days of fun and rain draining. As it keeps running, I open the engine hatch to see water up to the carpet and oil filters! Stern plug is secure, no big gaping holes in the bottom..WTF! What are the biggest leak offenders, besides leaving the drain plug out. Just glad it happened this week and not when it was sitting at the marina for a week. Pretty sure the water got over the dipstick hole, so oil change and spark plug pull for sure. Any other suggestions appreciated!

I see a plastic scupper with a bunch of water coming out, is the deck full of water here? Are you sure those things are secure?

That is on the rear keel, port side. Goes into the area between the clean out plugs. There is no check valve on it. Should there up a scupper type valve?

Heres another photo without gallons of water pouring out

Yeah pretty sure your scupper broke off there. Should be about a 1” corrugated hose from the deck drain to there I think. If it’s an open hole that’s where your water came in.

I don't have the broken scupper in my possession or I would take a pic to show you but I just had a similar issue where my scupper cracked and I flooded my engine compartment.
one thing that might be different with your situation, did you just drop the boat off the trailer and notice the issue or the boat was in the water the entire time?

That sounds like an easy fix, thankfully. It started pouring rain as i finished up at the storage yard. I'll check it tomorrow. Thanks
Last edited: Aug 6, 2020

The boat was in the water all night.

Don't try to order a new scupper from Amazon, I ordered one last Friday and they've messed my order up 3 times, I have a plastic one sitting here that they swear is the correct Attwood SS one, I ordered another one today and it's supposed to be here Sat. Even though mine sits above the waterline barely I'm still going to change it.

if it took a long time to get the level of water you are describing the water must be entering at a fairly slow clip?

Anyway, I asked folks on this site previously how long it would take me to change a scupper in my driveway, a few hours was the response, so not a terrible job.

As far as suggestions for you, I can tell you what the mechanics did with my boat. One of my motors died because of flooding so my situation will most likely be worse.

Here is my thread
https://jetboaters.net/threads/my-boat-flooded-help.28858/

I don't know the exact steps the mechanics took (did they remove the plugs and turn the motor over to see water push out? did they just change the oil without messing around? I am not sure, but here is what was on the bill.
1. changed the oil twice in the motor that stopped due to water, once in the other motor. I am sure they saw water in the oil after 1 change and had to do it again.
2. changed both air filters
3. replaced the scupper with an OEM version although folks on this site have mentioned getting a 3rd party mental scupper. I might have them do that after a year or two just for piece of mind
4. I don't think they changed the spark plugs. this was my first boating of the year and the plugs were actually brand new. Maybe they made sure they were dry and left them alone?

the above bill was around $1000.00, luckily I am under warranty (until Jan 2021), So Yamaha covered that. I also had my mechanic install a high water alarm in the engine compartment. There is a small display unit with an audible alarm that is placed at the helm. They estimated a few hours @ $100 an hour, so total install under $400. I know its probably a pretty easy install, but I just wanted it done quickly.

Just curious if you checked the oil? Is it milky? Maybe water didn’t get in there. Worth changing anyway just to be safe but just curious how the dipstick cap did to prevent water intrusion.

I believe that scupper is the one that attaches to the self-bailing deck (the port at the aft midline that drains water from the cabin). So, if your boat is out of the water like in the picture and water is coming out like that either a) you have a cabin full of water (which I assume you did not), or 2) your scupper is history. If there were tons of water in the bilge, there should be nothing coming out of that port.

If there is water in the oil, change it. Probably several times until you run it on hose a few min and don't get milk.

Then run that puppy. The heat will cause any miscellaneous water to evaporate. You want to eliminate all water possible or things will start to rust (in which case, you are toast).
tim

There was water from the bilge to the ski locker. Idled to the boat ramp so I could pull it out. The water level only came up to the dip stick for a bit....but I'm sure thats too long. I'll be doing all the rest today. Is that port supposed to have a oneway valve on it? Or juat connected to a hose? It's just a big hole right now!.

It should have a scupper valve on it (see the black flap). That black flap just stops water from flowing up the pipe and onto the floor of your deck. When the plastic breaks, it allows water to flow directly into your bilge. 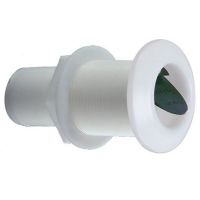 What happens is the plastic breaks behind the flange (on the right) and it effectively makes a BIG hole in your boat. Sometimes it just cracks before it breaks off entirely - creating a decent size leak point. You want to replace it with this stainless scupper....no cracking going on with this....short of a major crash! 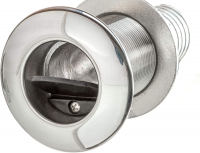 EDITED to add the following:

I explain what happens and how to fix it in this video:

Found the culprit. Thanks to everyone! Again. 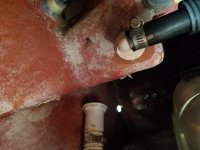 holy crap! Did that thing break off completely? Geez, I have a SS one from my old boat(already had it when I bought it), maybe I should go ahead and swap my scupper out during the off season.

Crap, And I thought I was safe with scupper being so high.

giroux68 said:
Found the culprit. Thanks to everyone! Again. View attachment 128829
Click to expand...