You guys are talking about "Christmas lights" and "snow showers" out that way. Today was a beautiful Fall day out on the Lake, upper 60's. Fair winds and sunshine here, having a blast on the water in October. A lot of boats out today, we caught/passed this one.

And then I told the Captain she had won her first race. Which is good because the party lights are already up!

What a great resource you have to take advantage of @zipper.
Lake Champlain is one of the things I miss most about Vermont.
He who makes a beast of himself gets rid of the pain of being a man

So, as mentioned, the 16-year old and I went Up Nort' to Da U.P. this weekend to close up Mom's cottage for her.

It was peak color, unfortunately, sunshine was hard to come by for most of the day Saturday. Still, I think these give you a good idea of what we saw.

Here's a few shots of what it looked like across the lake:

I took a few shots on the way out and back, but like a dummy, I forgot to set my shutter speed up higher so there's a bit of motion blur.

Pretty as it was, it was a little cool.

The sun started to peak out a little before suppertime though. That gave John and I enough time to take a quick spin up to "the bush" to capture some nice images.

These next pictures are from where I used to ride my 4-wheeler just a short hop from my Mom's house. If anyone ever wonders why, at the age of 48, I still miss "home" and will ALWAYS say I'm "from" the U.P. of Michigan (though I've been in Wisconsin for nearly 22 years now), this is a big part of the answer.

Sunday morning we saddled up and headed back to Wisconsin. We got a later start than I like (7:30 a.m. Eastern) but that was on purpose. We had driven up late Friday night and the deer-count got up to 15. I wanted to make THIS drive in daylight. (Technically it was only 14 live ones. #15 had just been hit a few minutes before we got there and looked like a pinata "after" picture. There was some discussion and we felt that since he gave his life in such a messy fashion, he deserved to be enumerated.)

The morning's sunrise seemed to be trying to remind us who was truly King of Beautiful Colors, but later relented - perhaps recognizing that the trees deserved a couple days to show off without being up-staged.

South of L'Anse, we would encounter the harbinger of things to come.

John had just started napping, but I had to wake him up for THIS guy. 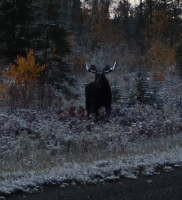 These were not telephoto shots. That big guy was right up by the side of road. I'd seen him from a distance a few times before over the years, but I'd never been this close. It's amazing how big they are. He seemed to consider challenging me (and I considered hitting the gas and getting out of Dodge) but then appeared to think better of it and faded back into the woods. 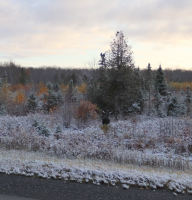 I've got a few hundred shots taken through the (somewhat dirty) windshield. This is the general flavor. You can see the colors fade a bit as we head south.

If we had stopped everywhere that had something worth taking a picture of, we'd probably still only be halfway home.

If you ever want to see it for yourself, peak color is typically right around the second week of October. We definitely hit it during peak color. In a week or so, it will be nothing but barren sticks poking up and pine trees.

I realize this post got pretty long, but I hope you all enjoyed it. It is IMPOSSIBLE to capture in a few pictures what it's really like to be there. The air is crisp and the smell of wet, fallen leaves seems to penetrate everything. If I had to make a list of the things I miss about the Copper Country, Fall Colors would be in the Top 3.

The cost of a new Ford Raptor (before sales tax, license, registration and interest if financed). Ironically the price is the same number of reasons I won’t be buying one. 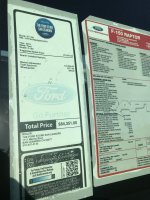 Ronnie said:
The cost of a new Ford Raptor (before sales tax, license, registration and interest if financed). Ironically the price is the same number of reasons I won’t be buying one.
View attachment 107044
Click to expand...

I didn't realize that "market adjustment " was a dealer installed option. They can keep that option.
"Changes in Lattitudes, Changes in Attitudes"
Follow me on snapchat: neutron401

I’m still at the dealership for warranty work on my 2010 expedition and noticed a wide range in raptor pricing, another raptor on the lot is only $72k.

That one is only 73k everywhere else, the dealer is F-ing u guys out there for another 10grand before you start. Some places are offering 10K off of F150s

Why mess around with a Raptor. 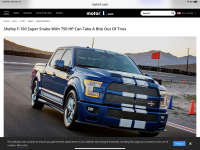 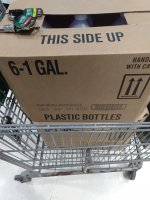 THIS is how I mark the start of fall. Antifreeze for disconnecting/winterizing the water at the vacation place, some for the boat, some for the 45-gallon tow-behind sprayer, some for the 3 backpack sprayers, and some for the handful of visits we'll make during winter.

My neighbor came back from Black River Falls and trail riding, and I can see the wife signing off on an off road vehicle for a few trips... Not sure if there's enough money to go around for all the things we'd like to do AND the things we should do

Ronnie said:
The cost of a new Ford Raptor (before sales tax, license, registration and interest if financed). Ironically the price is the same number of reasons I won’t be buying one.
View attachment 107044
Click to expand...

im debating getting a 2019 raptor (basically same truck with same options for around $65k) dealers are discounting $8k all over the place here due to lots of left over inventory).

Neutron said:
I didn't realize that "market adjustment " was a dealer installed option. They can keep that option.
Click to expand...

Must require a special tool to "adjust" it.

Step 1 to putting the Beneteau to bed for the winter is choosing a calm day at the marina to take the Genoa sail off of the forestay/furler. Today is perfect for that. The weather beyond today is not favorable to complete the job before haulout. The sail is in the green sailbag.

Imagine passing this driving down the road in the US!!! LOL. (Its hard to see, but it's a small pickup with a silver chariot replacing the whole top!)

Or this...sugar cane be taken to the mill

Julian said:
Imagine passing this driving down the road in the US!!! LOL. (Its hard to see, but it's a small pickup with a silver chariot replacing the whole top!)
View attachment 107107

Or this...sugar cane be taken to the mill

Looks to me like they were tied to the dock and the throttles got slammed to full throttle by accident.
Water Witch Digital Hour Meters, High Water Bilge Alarm, Dual Group 27 AGM Batts.
Located in Beautiful Naples Florida
*** CLICK HERE FOR JETBOATERS.NET STICKERS***​

List of top replies so far:
I have to go to work now...

WTF was my daughter's fish thinking????